Our covid wedding at town hall 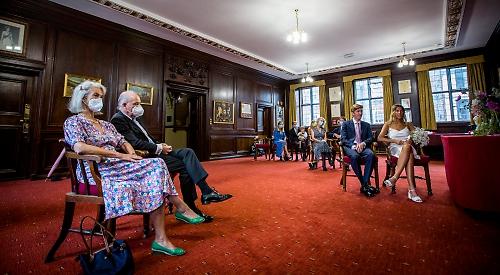 A COUPLE were married at Henley town hall after having to move the ceremony from Spain due to the coronavirus pandemic.

Freddie and Sophie Naylor-Leyland were the first people to have a wedding ceremony in the building since the lockdown was eased.

The couple, from Hammersmith, had originally set their hearts on a wedding at a house near Seville with around 140 guests, which would have taken place on Saturday.

However, they cancelled this in May due to the pandemic and switched it to Henley as Mr Naylor-Leyland’s parents, David and Jane, live in Woodcote and the couple have been living with them since before the lockdown began in March.

Mrs Naylor-Leyland, 34, whose father and grandparents used to live in Henley, said: “Moving it was just the sensible thing to do. We knew our parents would struggle if we went to Spain. My dad is over 70 and wouldn’t have been able to fly.”

Initially, the ceremony was due to take place at Henley register office in Northfield End last month. However, the couple would have been allowed only two guests so they moved it to the council chamber at the town hall, where they could have both sets of parents and their siblings present.

“I think everyone was so relieved to have an excuse to celebrate and were just so happy to be there,” said Mrs Naylor-Leyland. “If you’d told me that was how my wedding was going to pan out, I would have been a bit upset at the beginning but in the end I wouldn’t have wanted it any other way.

“A few of our friends have said to us that they want to downsize their weddings and would rather have a smaller gathering. I think a lot of people will do the same.”

Mrs Naylor-Leyland, who works in marketing, added: “The people at the town hall were amazing and so helpful.

“It only came to our attention a month before but we realised we could have more people than if we’d had it at the registry office. We were allowed 14 in total, so it was just immediate family.”

Mr Naylor-Leyland, 33, who used to be a pupil at Rupert House School in Henley, said: “We thought about delaying the wedding but we would probably have had to wait a while. We just wanted to go ahead and get married and the most important thing was being surrounded by our friends and family.

“We always had Henley pencilled in for the registry part and when we had to cancel Spain it made the Henley part all the more important.”

The couple, who met through a mutual friend in 2016, have been living together for three years.

Mr Naylor-Leyland, who works in finance, said: “I think we both knew straight away. We started going out very soon after we met.

“For me, it was Sophie’s sense of humour and her confidence and how comfortable we both felt around each other.”

He proposed during a road trip across Utah in October last year.

Mr Naylor-Leyland, said: “I was on gardening leave between jobs and we went out to America for 10 days. It had always been a dream to go out there together.” Henley Town Council had to obtain permission from Oxfordshire County Council’s registrar to hold ceremonies in the town hall.

Helen Barnett, town and community manager, said: “To receive this approval, the council had to prepare a very detailed covid risk assessment and really think carefully about how to organise weddings with the minimum risk to anyone attending.

“We want every wedding to be remembered for the right reasons and for people to feel safe.”

The town hall can accommodate weddings for up to 30 people in the Queen Elizabeth II room on the top floor, while the limit for the council chamber is 18, including two registrars and a photographer.

On arrival, all the guests had to sanitise their hands and register with the track and trace system. They then had to sit apart to respect social distancing.

The guests included the bride’s parents, Anthony and Flavia Cooper, who came from Gloucestershire, and her younger brother Charles and his wife Poppy.

The groom’s sister Victoria and brother John and his wife, also Victoria, were also present.

The bride wore an ivory slip dress with white heels which she bought online.

She had intended to have a dress made specially but decided to order it online after the Spanish ceremony was cancelled. Mr Naylor-Leyland wore a navy suit and his brother John was his best man. Two of his friends, Freddie Ryecart and Rupert Milne, shared best man duties for the blessing.

Having decided not to have bridesmaids, Mrs Naylor-Leyland chose to have two of her in-laws’ dogs, Ruby, a cavachon, and Edigh, a black Labrador, to act as “dogmaids”.

She said: “It was a fairly impromptu decision to have the dogs. I had spent a lot of time with them over lockdown, so I wanted them to be with us for the wedding.

“I never really wanted bridesmaids either so it actually worked quite well — the dogs had big bows around the necks.

“We weren’t allowed to have hymns, which was a bit of a shame but was understandable because of the current rules.

“It was pretty normal apart from the fact that there were a lot less people.”

Everyone, except the bride and groom, had to wear face coverings. The couple had to wash their hands after the exchange of rings but were allowed to kiss. They signed the wedding book while wearing latex gloves.

Afterwards, guests were allowed to throw confetti on the steps of the town hall before the newlyweds got into a convertible Mini Cooper with colourful balloons attached.

From there, they drove to St Bartholomew’s Chapel in Goring Heath for a blessing, which some of their friends were able to attend.

They then enjoyed a week-long honeymoon in Ibiza.