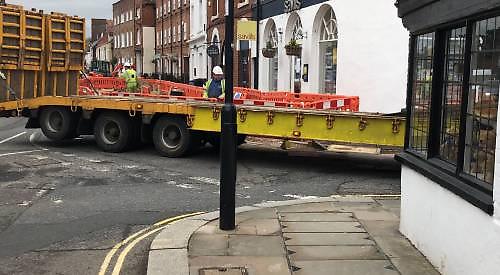 A SHOPKEEPER in Henley says heavy goods vehicles are a blight on the town.

Sandie Harrow, who runs the Stocks boutique in Bell Street, was speaking after witnessing a lorry come within inches of hitting a shop on the other side of the street.

Mrs Harrow, who also lives in Bell Street, said she saw the articulated lorry with a long trailer attempting to turn from Bell Street into New Street at about 11am on Friday.

She said the driver nearly “obliterated” Asquiths Teddy Bear Shop, a Grade II listed building on the corner, but just managed to make the turn after mounting the pavement.

Mrs Harrow said: “I was coming out of my shop in Bell Street walking towards that junction and I could not believe my eyes when the lorry attempted to come round. Surely that should be made illegal for a lorry of that size.

“How it missed the teddy bear shop I do not know. The building has been there since the 1500s and with one stupid driver he could have obliterated that in 20 seconds.

“It was inches away from the building. Luckily, that shop is closed at the moment but if I was in that shop I would have been terrified.

“I feel extremely strongly about these huge lorries coming through Henley. When they say they’ve got to cross over Henley Bridge, that’s absolute rubbish.

“That sort of vehicle has to go around the Marlow bypass and up on to the M40. For heaven’s sake, that’s a large vehicle on a motorway, let alone on medieval streets. I think it was probably the longest trailer you are allowed on the road.

“That’s not the first time I’ve witnessed things like that but it was the first time I managed to get my phone out in time to do something about it. How that shop is still standing I don’t know.”

Mrs Harrow, who has had her shop in Henley for three years, says she receives deliveries from across Europe but never from vehicles of this size.

On one occasion last summer, she witnessed the sign outside Bagatelle Toys at the same junction being knocked down by another lorry.

The former town councillor said: “The pavement outside the shop is all cracked where lorries go over it constantly. Even when there aren’t roadworks it happens because it is an impossible corner for all these huge vehicles to use.

“It is ridiculous — how can you have an A road going down such an ancient street that wasn’t meant for all these lorries?

“There are some beautiful buildings down this street but a lot of them don’t have foundations.”

Henley town councillor Stefan Gawrysiak is due to put a motion to Oxfordshire County Council, the highways authority, next month calling for an environmental traffic regulation order.

This would prevent lorries above 7.5 tonnes from using Henley as a short cut but those delivering to the town and immediate area would not be affected.

Councillor Gawrysiak said the latest incident was evidence of why the order was necessary. He said: “This shows that the campaign to reduce the number of HGVs going through Henley is absolutely right. We have been commenting loudly about this corner for a long time as it is really problematic for these large vehicles.

“We absolutely want a reduction in the number and size of these vehicles. This was not a one-off incident — this happens regularly.

“We want this weight limit for historic buildings in Henley and because of the narrow pavements and the air quality problems we have.”

Mrs Harrow added: “We are fortunate enough to live in one of the gems of England. How dare people think they can abuse such a beautiful little town by doing this?

“It is just terrible. I can’t see one plus for allowing these huge lorries through the town.

“The council has got to stop being wishy-washy and thinking it is someone else’s problem. What are they waiting for — for the whole of the teddy bear shop to be demolished because that’s what’s going to happen. People could lose their lives and it is a miracle something hasn’t happened already.”