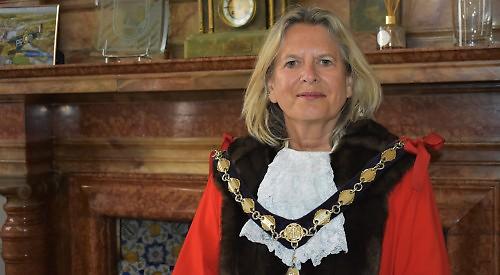 THE new mayor of Henley says she wants the town's businesses to thrive again under her leadership during the next year.

Sarah Miller was sworn into the role at the town's annual mayor-making ceremony, which took place at the town hall yesterday and was also live streamed.

Due to the coronavirus restrictions, only 15 members of the public were allowed to attend the ceremony at Queen Elizabeth II Hall.

Cllr Miller succeeds fellow Henley Residents' Group councillor Ken Arlett, who handed over the chain of office in front of about 30 people in total.

She has been on the council for six years and chairs the town and communities committee and the events sub-committee and played a key role in the return of the May fayre to the town centre.

Cllr Miller, who lives in Reading Road, said: “It is a huge honour to be elected mayor of the town I grew up in, of the town I love.

“Ken has been an inspiration, because of his energy and commitment, it’s been a pleasure working alongside him.

She will use her mayoral year to raise money for the Royal British Legion, the Regatta for the Disabled and campaign group Henley Plastic Reduction.

She added: “Last year has been incredibly difficult for all of us, we must support Henley’s businesses and restaurants as we open the town back again.

“I will work really hard for Henley and I am truly excited and eager to get going.”