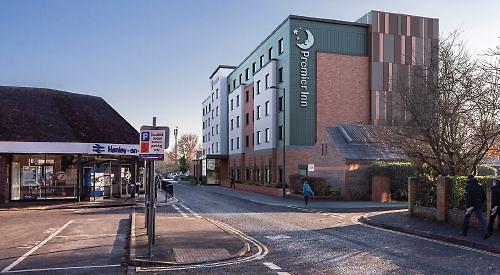 PLANS for a five-storey Premier Inn on the car park at Henley station have been formally submitted.

An application for the 115-room hotel has been made to South Oxfordshire District Council, the planning authority, by Blocwork, a partnership between the landowner Network Rail and developer Bloc Group, of London.

When the proposal was first revealed in December it was opposed by neighbours and town councillors who said the hotel would be bigger than necessary and an “eyesore”.

Despite this, most of the original plans have stayed the same in the application.

Nicola Tindale, a director of Bloc Group, said: “This planning application is the culmination of five years’ careful work by Bloc and our development partners.

“We have taken time to bring forward a good application that will transform an underused car park into an asset that will create jobs, contribute hundreds of thousands of pounds per year to Henley’s economy and deliver 12 more car parking spaces at Henley station for commuters, visitors and hotel guests.

“The development will bring many long-term benefits to Henley as well as addressing an identified shortage of hotel beds in the town.”

But the Henley Society, a conservation group, called the hotel design “horrendous” and said the scheme would put too much pressure on car parking.

Chairman Geoff Luckett said: “In January, 76 per cent of our members said they were against the hotel and one person said they would take it as it stood. The remainder said Henley could take a hotel but with a lot of modifications.

“There is nothing I can see that would change the perspective of me or our members. It is still five storeys and I just can’t justify another 115 bedrooms in Henley.”

Residents of Wyndale Close, which backs on to the car park, say the hotel would be too big and would affect their privacy and lead to more noise and light pollution.

Lorna Watson, who has lived in the road for 15 years, said: “Five storeys is absolutely ridiculous. It’s going to change the whole appearance of this part of Henley and you will be able to see this towering above everything else from miles away. We will become just like any other town.

“We already have people parking in this road and the hotel would make things more difficult.”

Anna King, who chairs the Wyndale Close Residents’ Assocation, said in January: “It surprises me how out of keeping it is with our historic market town and it will remain an eyesore for decades to come, should it go ahead.

“I don’t feel any effort has been made on behalf of the developers to adapt their design to the local surroundings. It is almost as if they have dumped their motorway service station blueprint on our town.

“It will become one of the tallest buildings in Henley and will materially alter our skyline for the worse and that’s quite a scary thought.”

Following the initial consultation, a statement of community involvement was produced by Walsingham Planning, of Bourne End, on behalf of the developer.

The statement says: “The proposed hotel sits on a site within an existing built-up area of the town.

“The site is previously developed land and is located outside the conservation area, next to an existing railway station and line.

“The site is very much urban in character and there are examples of surrounding buildings that are similar in height and scale to what is proposed, particularly those buildings at the entrance of Station Road.

“The siting of the building ensures that there is maximum distance to those nearest neighbours to the south and west, allowing for a five-storey building in height to be achieved. Technical studies have been undertaken that demonstrate a building of the size proposed can be accommodated on the site and is not out of keeping with the urban nature of the site and its surrounds.

“The pre-application discussions with South Oxfordshire District Council have confirmed that this approach is acceptable.”

Notification letters were sent to neighbouring homes and businesses and 132 responses were received.

Some people questioned if there was a need for a new building, given that the old Imperial Hotel in Station Road has been shut since 2006 and could be re-opened instead.

Walsingham Planning says: “While there may be an existing vacant hotel building within the town, it is not for the planning system to require this building to be brought back into use when there is a clearly identified need for larger-scale hotel proposals to come forward in those locations that the adopted local plan seeks to support.

“The need for new visitor accommodation within the district and the town goes beyond the refurbishment of one currently vacant hotel building.”

It says the Premier Inn would not be unneighbourly, adding: “Hotels by their very nature are not land uses that are inappropriate to neighbouring residential development and locations such as this in a built-up area.

“A detailed noise assessment has been prepared that demonstrates, through appropriate conditions, measures can be introduced that ensures all plant and equipment required to serve the new hotel will not have an adverse impact on... neighbours and hotel guests.

“The distance from the rear elevation of the hotel to the nearest dwellings will be 48.5 metres, providing a significant area of breathing space. This distance will avoid a sense of the building being overbearing on neighbouring properties and ensures that distances between windows far exceed those that would normally be required for residential developments that back on to each other.”

There would be 12 new parking spaces, bringing the overall number to 308. Residents argue this is insufficient but Premier Inn says it’d enough for both guests and commuters.

Network Rail says there is spare capacity at Henley already and the scheme would allow 55 new spaces to be created at Twyford, the other terminus on the Henley branch line, where there is a shortage. There may also be more space generated in Goring and Wargrave.

Premier Inn, which is the largest hotel chain in the UK, estimates the Henley hotel would add £1.9 million a year to the local economy.

Paul Smith, acquisitions manager at Premier Inn, said: “Independent analysis calculates £975,000 of this money [is] expected to be spent in restaurants, shops and local businesses in the town. Flexibility, combined with our high year-round occupancy and our guests’ desire to explore the areas around our hotels, creates substantial economic benefits around our hotels.”

Councillors raised concerns about the height and appearance of the structure.

Councillor David Eggleton said: “I think it is unsightly. If it was done on a smaller scale and there wasn’t an impact on the residents in the area, I would be for it.”

Councillor Will Hamilton said: “Limit the size to three storeys. If they need a fourth storey they should go down. They should do car parking underneath.

“I’m concerned for the residents of Wyndale Close and would ask the developers to look again at lowering it and moving it away from the area.”

The council’s planning committee is expected to discuss the application on July 13.