HENLEYS skate park has been closed by the town council because it is unsafe.

A fibreglass ramp at the facility in Makins recreation ground has holes in it which its feared would injure skateboarders or BMX riders. 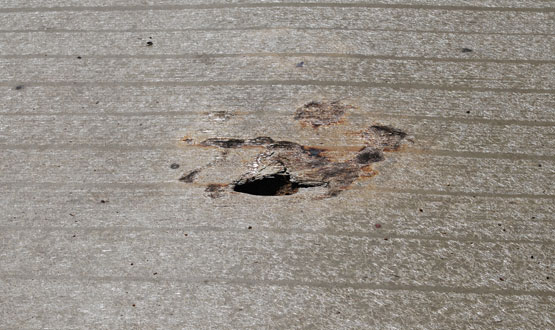 The town council, which owns the land, has put up a security fence and warning notices around the equipment after it was examined by parks staff.

It is the second time in a less than year that the council has closed the skate park. In November, a half-pipe was cordoned off due to safety fears.

Town clerk Mike Kennedy said: It was reported to me by a member of the parks team that the equipment was unsafe.

I have got to have regard to the safety of the users because if I allowed that facility to remain open and there was an accident and action taken against the council, then I would have felt the full weight of the health and safety law on my shoulders.

Mr Kennedy said the skate park had been in gradual decline and an inspection by the Royal Society for the Protection of Accidents earlier in the year resulted in a high risk rating.

He said the cost of repairs would run into four figures and the issue would be discussed at a meeting of the councils recreation and amenities committee on September 9.

The Henley Skate Park Initiative, which successfully campaigined to replace the facility, posted a message on Facebook to alert users.

Colin Brathwaite, who leads the group, said: It is a little bit more than a hole. There are sharp bits on it, some of the panels are lifting and the fibreglass is frayed so that if you landed on it, it could ause skin irritation.

It is a shame for Henley to lose its only wheeled sports facility but the town council has spent thousands of pounds on repairing it since it was built.

There must be a point where the council needs to make a decision on whether it is worth spending more money on an ageing facility to keep it in a working condition.

The facility is covered by town council liability and, although it might come in criticism for closing it, if it was kept open and someone had an accident, then they would come in for even more criticism.

It is a shame but hopefully it wont be too long before we can start work on the new one.

The town council has pledged £75,000 and the initiative hopes to obtain grants.

Mr Brathwaite said: Were working hard here to create a new, far improved, concrete skate park for Henley. As with any ambitious project, raising the money for it takes time. We have £77,000 so far and were working on raising the remaining money through grants and donations.

We will be applying for a community capital grant next year. There is a project in Thame of a similar size and cost which was successful with its grant this year and Sport England has said that it would look favourably on an application.

We will also be looking at smaller grants and for donations from the public. We have come too far and created too much momentum for it to not happen. It is only a matter of time before we raise the remaining funds required.

Maverick Industries, a specialist company, will build the facility.

The idea of a new skate park was first raised by Henley scout leader Dave Adamson in April 2011 when he described the existing one as shoddy and dangerous.

A group of users and supporters was created to investigate and a year later, following consultation with residents, the town council voted to support a new skate park. A fund-raising campaign was launched in February last year.

The town council submitted the planning application for the new skate park in March this year. Most of the 150 responses received during public consultation were in favour.

Contact information for Henley Skate Park Initiative can be found at www.henleyskatepark.org