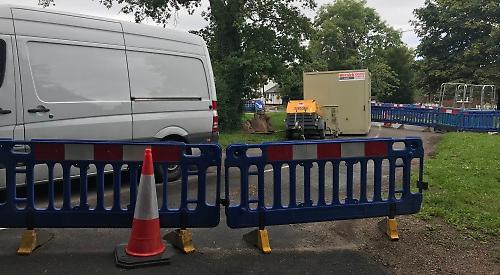 THE landlords of a village pub say they are losing trade because of a six-week road closure.

Adam and Sandra Purdy, who run The Horns pub in Crazies Hill, say their takings are down by about half due to the main road through the village being shut for work to replace water mains.

The street was closed by Thames Water on Wednesday, July 26 and is not expected to re-open until early next month.

A diversion has been set up via Hatch Gate Lane and Highfield Road and the car park of the pub is still accessible.

However, the Purdys, who have run the Brakspear pub since 2015, say the directions are unclear and the road closure signs are putting off potential customers.

The couple say the pub is usually at its busiest during the summer months due to the amount of passing trade.

Mrs Purdy said: “We’ve got a six- week closure of the only road in Crazies Hill.

“It’s completely blocked off and anyone coming from Wargrave has to go via Kentons Lane. The diversion is not working. The signs are very misleading — there are two sets of signs sending everybody everywhere.”

She said that trade during the week hadn’t really been affected as the customers were mainly villagers.

However, at weekends, when they usually had a lot of visitors from Reading and Maidenhead, custom had been down.

“When you are a country pub you rely on the roads being open to get passing trade,” said Mrs Purdy. “You get people who are out for a drive and don’t know the area, so when they see a road closure sign they just think they will go somewhere else.

“We are down by about 40 per cent, which is testing. The summer months are when we make our money to cover the quiet periods, so we may have problems later in the year.

“We are open as normal but we were thinking should we reduce staff hours. Then what if we get a sunny day and everybody comes out?

“We have everyone in as normal but we are keeping everything else tight. At least this didn’t happen on the royal regatta weekend.”

The couple are considering submitting a compensation claim to Thames Water — they have already been given a reduction on their rent by Brakspear.

Mrs Purdy said: “Thames Water has said we can claim loss of earnings, although we will have to wait until everything is back up and running again and then work out exactly how much we are down by. I’m also dealing with the business rates office to say we have a six-week closure so am I entitled to a reduction?”

The couple invited a site manager from Thames Water to travel around the diversion route with them last week so they could point out the signs which were causing confusion.

The company told them that diversions must be set up on the same class of road as the one that is closed.

A Thames Water spokesman said it was “essential” to replace the old water pipes with new, tougher plastic ones, which were less prone to leaks and bursts.

“This work is happening during the school holidays to limit the impact on traffic with a clearly signposted diversion in place,” he said. “Our customer representatives continue to work closely with those businesses affected.”

He said the company had changed to diversion route last week so traffic was now re-routed along Kentons Lane rather than Worleys Lane and some of the signs had been moved to ensure they were visible to motorists. There were also “open for business as usual” signs in place.

The Purdys, who were married in September 2014, took over at the pub after moving to Crazies Hill from Lancashire to be closer to Mrs Purdy’s family in Newbury.

They became the seventh tenants in as many years after John and Sarah Schlaefli left the business after just 18 months in charge.

The Purdys have more than 20 years’ experience in the pub and restaurant trade, with Mr Purdy working as a chef in Michelin-starred restaurants and his wife as front of house.

The pub stages regular events, including Hornfest, a beer festival that will take place over the bank holiday weekend of August 27 and 28, featuring live music and a barbecue.

Meanwhile, several roads in Wargrave and Hare Hatch are being affected by work to install fibre optic cables.