Trio pay tribute to relatives who fought in war 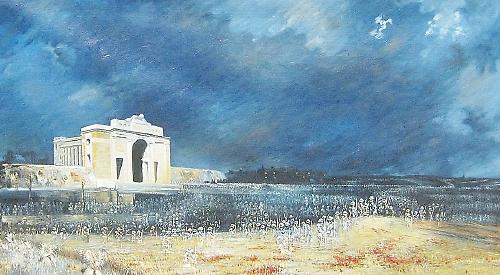 THREE generations of one family travelled to Belgium to pay tribute to relatives who fought in the First World War.

The special commemoration services were held on the 100th anniversary of the Battle of Passchendaele and featured dignitaries including the King and Queen of Belgium, the Prince of Wales, the Duke and Duchess of Cambridge and Prime Minister Theresa May, who shook hands with William.

Mr Copland’s grandfather Bill fought in the battle, while his great grandfather Will Longstaff was a renowned war artist who also served and later painted a famous picture of the Menin Gate, a memorial to those who died in the conflict. Both men received medals for their service and Bill went on to serve as a major in the Second World War.

The Coplands attended the service in Ypres market square on Sunday, July 30 and a second one at the Tyne Cot Cemetery the following day.

The first was hosted by Dame Helen Mirren and featured War Horse author Michael Morpurgo with the model used in the stage show and journalist Ian Hislop, who read passages from his play, The Wipers Times, about the satirical newspaper produced by soldiers during the Great War.

Images of the conflict were projected on to buildings in the town during the day and more than 4,000 relatives of those involved in Passchendaele attended the service at the cemetery.

Mr Copland, 43, is an IT consultant who lives with his wife Julianna, 41, a teacher at the Berkshire College of Agriculture, William and their twins Annabel and Edward, five, who were born on Armistice Day 2011.

He has several picture albums and newspaper cuttings about his relatives’ war service.

He said: “I’m interested in the history of the First and Second World Wars and our family history and this was an opportunity I couldn’t miss.

“We decided to all go over there and thought it would be nice if we had the three generations. William knows a bit about it but he will probably be more appreciative when he’s older. He’s only seven but it was a chance for him to experience it and have the memories. These kinds of stories need to be recorded.

“We also visited the Vimy Ridge, which has another war memorial which was painted by my great-grandfather.

“It was pretty special, which was shown by so many important people attending.”

Mr Copland Snr, 70, a retired public relations officer who lives in Pinkneys Green with his wife Liz, said: “Every night at or dusk the Last Post is played by buglers at the Menin Gate but this was a special one.

“There royalty and the family of people involved with the battle, so it was a big event.

“William stayed up until almost watching it and Ypres was solid, so many people had gone to it.

“The Monday was the anniversary of the start of Passchendaele and there was a memorial service at Tyne Cot, the memorial which has more than 30,000 names. The Menin Gate has 54,000 — it’s unimaginable numbers of people.

“The service was beautifully done and it was very affecting. You got that sense that it was just horrendous for everyone on both sides. They lost thousands of people for very little.

“The wider context is that it’s 100 years since this battle and 70 years since the Second World War. There has been no war in Western Europe since then, the longest we’ve ever gone.

“These commemorations should not be about glorifying war but remembering the sacrifice and recognising that we need to work hard together to stand a chance of this happening again.”

Maj Copland was 15 when he joined the army in his native Liverpool in 1914 and travelled to the Western Front in France in 1917 as a signaller for the infantry.

He spent a year in the country before being gassed and sent home as an invalid, where he had a life-saving operation to remove a blood clot from his lung.

His brother David, who was in the medical corps, was killed in 1918.

Maj Copland went on to serve as a commando in the Second World War, where he was involved in a raid on the dock of Saint-Nazaire before being captured and spending three years as a prisoner of war.

Mr Copland Snr said: “It’s a miracle he survived as long as he did — a number of his colleagues in the Signallers were killed.”

Maj Copland later worked as an engineer and managing director and lived in Cookham with his wife Ethel. His son Peter was born during the Second World War and Mr Copland Snr was born in 1947.

Capt Longstaff was born in Ballarat in Australia and served in the Boer War in the late 19th century before moving to Paris to work as an artist.

At the outbreak of the First World he signed up to the Australian Imperial Force remount unit, which provided horses to troops and served in North Africa, including the Battle of Gallipoli.

He was injured and was sent back to England to recover before being posted to the Western Front as an official war artist.

Capt Longstaff was involved in the development of camouflage for tanks and artillery.

After the war, he resumed work as an artist in London and attended the opening of the Menin Gate in 1927.

After the he found it difficult to sleep and went for a walk by the monument, where the number of visitors sleeping rough inspired him to paint Menin Gate at Midnight, which depicts ghostly soldiers rising from the ground near the structure.

The painting became a famous symbol of the fallen and admirers included George V and Sir Arthur Conan Doyle, who became a good friend of his.

The work was later bought as a gift for Australia by Lord Woolavington and now resides in the Australian War Memorial museum in Canberra.

Capt Longstaff painted other memorials, including the Cenotaph in London and Vimy Ridge in France, while a work called Drake’s Drum was presented to the Queen and hung in Prince Charles’s nursery.

His family believe he may also have piloted a “Little Ship” during Operation Dynamo to rescue soldiers from Dunkirk in 1940.