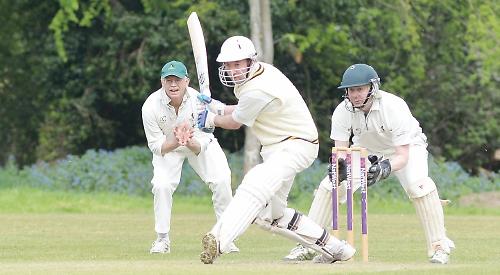 PEPPARD STOKE ROW pushed Thames Valley League side COOKHAM DEAN all the way before falling to an 11-run home defeat on Saturday.

The visitors won the toss and looked set for a huge score as captain Ben Millar and South African Chris Marrow raced along at more than six an over for the opening 10.

However, the introduction of Chris Humphreys accounted for Millar while Matthews retired, and with fellow spinner Wynand Lamprecht claiming a brace of wickets, the hosts hauled themselves back into the contest.

Home captain Dan Hayden dismissed Rob Mettler on a wicket which showed surprising pace and bounce for the time of year, and with Humphreys and Hamish Scott bowling well at the death, Cookham were restricted to 211-8 in their 40 overs, Tom Fray making 39 not out to take them to that total.

Peppard Stoke Row’s reply began in terrible fashion as Fergus Nutt and Andy Watts both fell cheaply, but an excellent third-wicket stand between Lamprecht and Richard Walker brought the home side back into contention.

Walker was eventually bowled for a well-crafted 41, but when Lamprecht retired on 80, Peppard Stoke Row were still well in the hunt.

However, the run rate gradually climbed, and when Rich Ashton hauled out at deep mid-wicket with his side needing 31 off 22 balls, the momentum swung decisively in Cookham Dean’s favour.

Tim Vines led the way as PEPPARD STOKE ROW KITES collected a first victory of the season with a 61-run triumph at home to CHECKENDON on Sunday.

After being asked to bat Peppard Stoke Row captain Fergus Nutt and Don Townsin looked in fine touch with the former motoring to 37 before he edged Tony Breakspear behind.

Townsin followed soon after, but Phil Duncan kept the hosts’ momentum going until he was bowled by Ashish Talreja to leave Peppard Stoke Row on 121-3.

Vines looked in imperious touch, striking five sixes in his 71 before retiring. Richard Ashton followed suit in reaching a half century before departing, but with Pradeep Kumar helping himself to a brisk unbeaten 32, the home side ended their 35 overs on 256-3.

Checkendon’s reply started badly as Stewart Manning was bowled by U14 Joe Richardson, giving the youngster his first senior wicket.

Hamish Scott picked up a brace — aided by a one-handed slip catch by Humphreys to remove Ash Talreja — to reduce the visitors to 36-3 and when Chris Proudfoot also claimed a couple, Checkendon were in trouble at 88-5.

A fine partnership between skipper Sam Arrowsmith and John Acland-Hood began to give Checkendon hope, but left-arm spinner Humphreys continued his fine start to the season by taking 4-29 as the visitors were restricted to 195-9.

The home side started well with former Oxford Blue Mike Howat reaching 32 and Tom Macdonald helping himself to 60 before retiring not out.

Angus McGregor and Lee Bainbridge kept the momentum going as the hosts racked up an imposing 185-3, with Alfie Burnett, Allan May and skipper Matt Kimber the Peppard Stoke Row wicket-takers.

Gerry Bacon led the Maharajas’ reply but with Sam Kimber the next highest scorer, the visitors gradually fell behind the run rate and despite Matt Kimber’s late maximum, they were restricted to 172-9.

Chris Humphreys scored his maiden half century as PEPPARD STOKE ROW rounded off a busy weekend with a 29-run victory over Oxford side ISIS on Monday.

Peppard Stoke Row suffered an early setback as Don Townsin edged behind, but U19 duo Fergus Nutt and Humphreys steadied the ship with a partnership of 56 for the second wicket.

Captain Nutt eventually skied one to mid-off to depart for 44, yet this only hastened the arrival of Mark Lambert who blasted the ball to all parts. His rapid 70 put Peppard Stoke Row in control and with Humphreys accumulating efficiently until he fell for 71, the home side posted 218-5 from their 40 overs.

Peppard Stoke Row made early inroads courtesy of U16 Alfie Burnett, who bowled his best spell in senior cricket to claim 3-15, aided for his first wicket by a miraculous one-handed catch in the gully by Olly Nicholson.

The Isis reply continued to stutter as Harry Jordan and Olly Nicholson turned the screw and when Richard Ashton surpassed the latter’s effort with a reverse-one-handed catch at short cover off Jordan the visitors appeared to be dead and buried.

However, Joe Harden had other ideas and began to pull his side back into the contest, amassing a half century to keep the game alive.

Humphreys was tasked with ending the contest and picked up a brace and when Ashton took his second fine grab of the game off Nutt to account for Harden, proceedings were ended with Isis dismissed for 189.