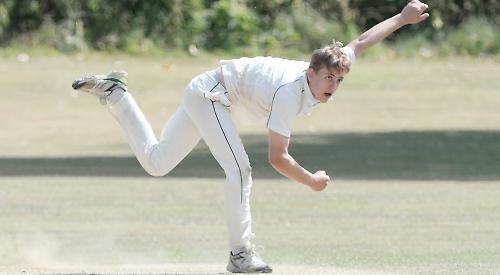 HARPSDEN lost out away to Division 1 league leaders WRAYSBURY last Saturday on a scorching hot day.

Having won the toss and batted Wraysbury openers Yasin and Ward attacked from the off taking 34 from the first two overs and bringing up the team’s 100 in the 13th over for no wicket with the help of some loose bowling and poor fielding from the visitors.

After drinks, Brown and Franklin restored some order with tight bowling. Franklin made the breakthrough when Yasin was well held by Heilbron at point for 78.

When Brown had Baig stumped for 7 and removed numbers five and six for ducks, Franklin then removed the other opener Ward for 64 and Harpsden were back in the game.

However, Mohan (54) and skipper Prasad (43 not out) wrestled the momentum back towards the hosts. Some lusty blows towards the end allowed Wraysbury to declare on 308-6 after 50 overs.

The Harpsden innings could not have got off to a worse start as four of the top five were dismissed without scoring, leaving the visitors reeling at 1-4.

Skipper Wright joined Heilbron and the two batted together well for eight overs before Wright edged behind off Yasin for 10.

Heilbron showed good grit and determination, battling to 67 as chaos reigned all around him. After some big hitting from Bevan and Heilbron took Harpsden past 100, Wraysbury wrapped up a comfortable victory when Bevan was caught in the deep looking for another boundary for a career-best 30. Harpsden were all out for 135.

HURLEY slipped to a defeat in their home Division 2 clash with LEY HILL.

The visitors were virtually unchanged from the encounter earlier in the season while Hurley fielded five changes.

The visitors won the toss and batted and their confidence was underlined as they raced to 85 in 12 overs enjoying the pace of Shoab Riaz and a fast outfield. Imran Arshad cut down Ollie Runswick as the batsman lobbed a return catch. Ley Hill ticked on at more than seven an over, Phil Ridgeway replaced Riaz, was punished in his opening over, but then had Peterson stumped by Dave Simoes.

Hurley tried to staunch the flow of runs as Richard Clark survived an appeal for another stumping when on 19 as Ridgeway chipped away at the wickets finding turn from the dry pitch.

The visitors called a close to the carnage after 44 overs on 286-6.

Hurley’s reply hit the buffers after only three balls as Clive Williams pushed back to Daluwatta. Simoes and an expansive Riaz added 43 before Riaz’s Twenty20 approach had him bowled by Daluwatta.

Varun Sharma greeted his first ball with a pull for six as 42 was added for the third wicket. At 85-2 Hurley were comfortably placed, but the drinks break triggered a clatter of wickets. Simoes edged to slip, Sharma fell to a stunning catch at cover, Joe Graham was given caught behind while Arshad edged to the keeper as Hurley had lost 4-7.

Henry Graham and Phil Ridgeway added 20 but the Hurley innings was wounded. Ameer Ali struggled against the bowling as Hurley declined to 135 all out in 35 overs.

HARPSDEN 2nds settled for a draw in their Division 3 clash at league leaders PINNER. The hosts won the toss and made the easy decision to bat first on a flat track and were quick to reap the benefit as they raced to 72-1 off 14 overs, despite a good opening spell from James Paice.

It was the introduction of Will Stevens and Rod Birkett that turned the game in Harpden’s favour as the their bowling partnership resulted in 59-4 in the next 21 overs.

Soon afterwards, Pinner were 137-6 and looking at the possibility of a distinctly sub par score.

When Sasha Burgess had to leave the field due to illness and a few catches were put down, Pinner were able to push their score up to 226-6, but they had to bat their full allotment of 52 overs to do so.

The Harpsden reply had an early setback as Oscar Ratcliffe was bowled by Pandya but when Tom Mitchell joined Ben Hancock, Harspden moved along serenely and at 96-1 in the 19th over they looked comfortably poised.

A good diving catch at cover resulted in the dismissal of Hancock and that was to prove to be the crucial moment and momentum was never really regained after that. Mitchell fell soon afterwards as did Paice and Nick Brown and with the score on 120-5 it looked as though Pinner were going to add another victory to their sseason.

Stevens and Burgess had other ideas as they ground out a draw with Stevens being particularly watchful to ensure that the Harpsden tail weren’t exposed to the quality Pinner bowling.

Hurley 2nds were without a fixture in Diivsion 4 last weekend but return to action tomorrow (Saturday) when they travel to league leaders Holyport 2nds.