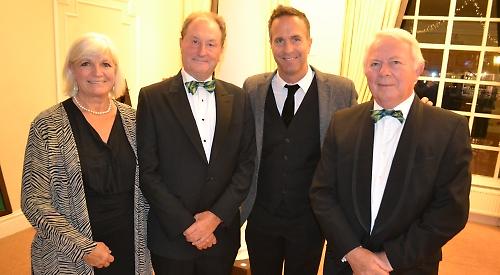 A total of 130 guests attended the event at Phyllis Court Club in Henley.

The three-course dinner was followed by live and silent auctions with lots including tickets to The Lion King musical donated by Sir Tim Rice and a week at club chairman Brian Kenworthy’s villa in Portugal.

Vaughan, an Ashes winner, was in conversation with former England fast bowler Gladstone Small and then answered questions from guests.

He said: “Our roles as ex-players is to support the grassroots of the game. We all started at a club like this and it’s important we give something back. I hear they have got a good junior section.”

David Winter, the club’s fund-raising and sponsorship chairman, said: “The dinner was fantastic. There were comments about it having been one of the best.

“There was an incredible atmosphere and the president’s speech, as ever, was a triumph — he just gets better and better and funnier and funnier — and Michael Vaughan was on really good form. He and Gladstone know each other really well and were a great double act.

“We had a lot of people who hadn’t been to one of our events before and the comments coming back have been very pleasing.”