Brock hits best ever score as title charge hots up 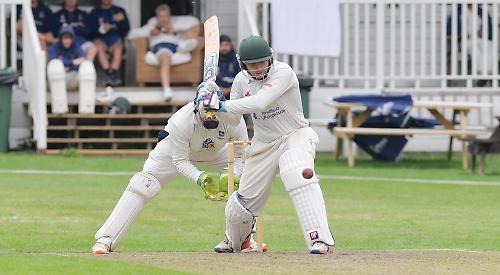 HENLEY maintained their Home Counties League title challenge with an enterprising and assured victory against HIGH WYCOMBE last Saturday in a game which, at times, had the home support shifting nervously on the edge of their seats.

Winning the toss on an overcast and chilly morning, Henley chose to bat, only to quickly go two wickets down as Andrew Rishton was bowled by Parsons going hard at the ball and Matt Rowe spooned a Tom Hampson delivery to short cover where it was athletically caught by Casterton.

Euan Woods and Richard Morris dug in and counter-attacked, the former playing with plenty of intent only to lose his wicket to Hampton rather casually.

Tom Oldershaw never looked comfortable and was soon caught behind off Burden bringing Euan Brock to the crease, ushering in a period of watchful consolidation by Brock and Morris, punctuated by the odd angry shot.

A couple of nuisance value rain breaks did little to spoil the momentum as Morris brought up 100 in the 25th over with a couple of boundaries. An enterprising innings came to a premature end as Morris chipped a Dobb delivery to shortish mid-wicket to make it 106-5 in the 27th over which was not ideal.

But ever since scoring an enterprising half century in the league’s Twenty20 semi-final against Slough, Brock has been in a rich vein of form and so it continued here. Now partnered by an also in-form David Barnes, the pair set about the Wycombe bowling to good effect, efficiently rotating the strike and putting the bad balls to the boundary to put on 48 for the sixth wicket when Hampton trapped Barnes lbw.

Momentum was maintained with the arrival at the crease of Mike Williams whose ball placement and speed between the wickets kept the strike rotated whilst Brock kept up the pressure with well placed boundaries.

Not to be outdone on the boundary front, Williams hooked Hampton for six. When Brock departed for a league career best score of 65, the hard hitting Tahir Afridi smashed 15 off just eight balls as he and Williams saw Henley to 232-7 in their allotted 50 overs.

Given High Wycombe’s mercurial form this year, 232 was always going to be enough, but not before Wycombe opener Eliot Callis had given all present a taste of what might have been had the visitors been possessed of any like-minded performers. Like Joe Root, an alumnus of Worksop College and a product of Yorkshire Cricket and currently an MCC young cricketer, Callis put in a blistering performance that included 14 fours and a six that took his side to 123-1 in 18 overs, showing scant regard for the Henley bowling until he was undone by the wily spin of Gurveer Singh who struck in his first over.

Even then, with Marles showing plenty of intent and joined by his skipper Hawkes, the game was afoot. But despite having leaked a monotony of wides, Henley kept their nerve and their shape and discipline in the field and gradually the Wycombe batting unravelled. Hawkes was bowled by Woods and keeper Russell went to hoick Woods out of the ground only to miss and depart lbw, making it 151-4. Dobb briefly flattered to deceive before becoming Singh’s second victim of the day, caught Brock at short cover. Once Marles had departed, caught at slip off Brock’s first ball of his three-over spell, it was just a matter of time as the lower order, Lasseter apart, showed little permanence at the crease, helped on their way by a fine stumping by Williams that accounted for Chris Russell and finished off in the 44th over by a slip catch by Tom Nugent off Afridi that accounted for Burden with Wycombe 27 runs short.