Scouts make animation film to explain what they do 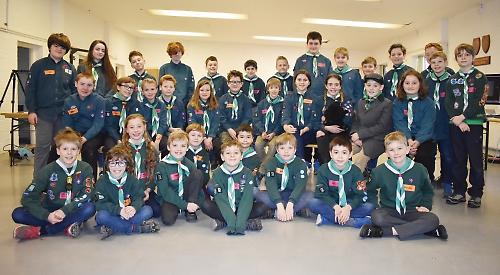 ABOUT 40 scouts and cubs took part in an animation workshop in Henley.

They helped make a short film explaining what being a scout is all about.

Chocolate Films, a production company based in London, ran the workshop, which guided the children through how to use animation software and equipment.

The youngsters were split into small groups and each one made a section for the film during the five-hour session at the scout hut in Greys Road. They recorded voiceovers and shot their own animations. The film will be broadcast on social media and each child who took part will get a badge for using media and social media.

Each animation had to cover a specific topic, such as volunteering, learning new skills or earning badges, and contain footage which showed this in action.

They made backdrops and moving pieces out of paper and other materials. The pieces were then photographed frame by frame to show “movement”.

Scout leader Linda Cookson said: “All the ideas came from the children who worked well together.”

Members of the Friday and Sunday groups of 1st Henley Scouts took part along with Henley cubs.