Fun in the sun at sprint triathlon 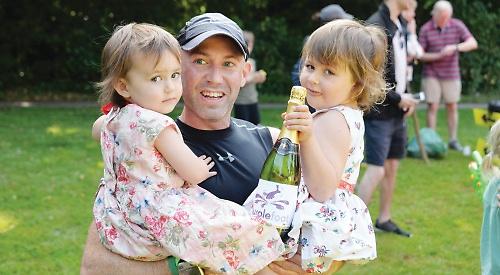 Competitors gathered at Mill Green for Sunday’s race, which comprised a 750m swim in the River Thames, a 20km cycle ride and 5km run around local villages.

They set off at 7.30am and began arriving back in Wargrave just over an hour later, so they missed the blistering temperatures later in the day.

The fastest competitor was 33-year-old Joey Rossi, who finished in one hour, eight minutes and 39 seconds.

Mr Rossi, from Bath, said: “It’s my first time competing here. It’s a really good event, well organised and marshalled. My wife’s sister lives in Burchetts Green and they were all out cheering. It’s really nice to see a familiar face on the course.”

He said: “It was the best swim I’ve ever had. We swim in the river here pretty much every other day. There’s quite a few guys from my club, Tri20.

“This is a fantastic local event. It’s nice to have a non-serious triathlon.” The fastest woman was Sophie Whitworth, from Henley, who finished in one hour, 15 minutes and 35 seconds.

Mrs Whitworth, 46, is a Great Britain triathlete who has competed for 20 years and won world championships in her age group.

She now works as a triathlon coach specialising in swimming at Athlete Service in Henley.

She said: “It was a fantastic race. I’ve done it before and won so my aspiration was to retain my title.

“I really like to support local events and this one brings in the whole community. It was nice to get all that support from friends.” The team event was won by Caversham Triathlon Club, comprising Nick Parris, Alex Warner and Harry Gee, who each took one section.

Mr Gee, who did the run, crossed the finish line with his two daughters Summer, two, and Olivia, four, posting a team time of one hour, five minutes and 31 seconds.

The triathlon was part of the Wargrave Village Festival, which is running over three weeks in June, and raised £1,000 for the Wargrave Lido appeal. Jo Maundrell, who organised the event with fellow villagers Hannah Young and Claire Winters, said: “It went really smoothly.

“It was an event for everybody — we had some super-fit people and some fantastic locals who gave it a go. One guy did the swim in Tarzan pants and used his wife’s bike for the cycle ride!”

For the full results and more pictures, see this week’s Henley Standard.