We went crunch into George Clooney's boathouse, my foot 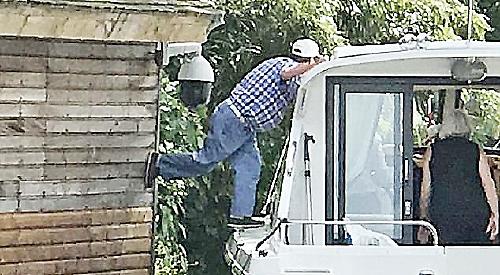 IT sounds like the plot of one of his movies: George Clooney’s boathouse is targeted by an out-of-control boat on the River Thames.

A national newspaper website reported that the boat, called Juno Too, collided with the newly-renovated boathouse at the riverside home in Sonning that the Hollywood star shares with his wife Amal and their newborn twins last Friday afternoon.

According to a witness, the craft “ploughed” into the structure with “a loud crunch”.

And the villains of the piece? Two “elderly couples” on an afternoon jolly on the river.

But before Hollywood scriptwriters reach for their keyboards, I can reveal that the alleged collision was in fact not even as much as a bump.

John Maguire, a passenger on the boat, says he simply used his foot to push off gently from the boathouse, a common manoeuvre when turning in the river.

Mr Maguire, who has been a trustee of Upper Thames Motor Yacht Club at Mill End, Sonning Eye, for more than 40 years, said: “I was crewing for another member of the club who is fairly new and I told him to go up slowly and then turn to the port side.

“I had to push off from the boathouse as we turned but there was no damage, no excitement. It’s quite normal to put your foot against a boathouse for pushing off, there’s nothing wrong in it.

“I’ve been a member of Upper Thames for 40 years and I’ve taken my boat everywhere.

“I can turn my boat on a sixpence but he is new and couldn’t, that was it. Nobody was hurt and there was no damage.” Mr Maguire says he and the pilot were returning to the club ahead of a fund-raising event for children’s charity Starlight on Saturday, where they entertained more than 100 terminally ill children, and were asked to moor near the boathouse.

He said: “We were getting ready for the charity event and everyone was coming down to the club to help.

“The boat owner’s wife was helping with the food and I did a barbecue for 170 people the following day. We were all doing a good job but there was nothing written about that.

“The report said there were two old guys in charge of the boat who were going too fast. It said I had white hair. Well, I’m 75 years old but there’s not a grey hair on my head! It’s insulting and that’s what offended me most.”

Mr Maguire and fellow club members met with the Clooneys’ estate manager Shak Hussain on Monday to smooth things over.

Mr Maguire said: “We have a marvellous relationship with them, they are the most fantastic neighbours.

“When George’s trees were hanging over the river earlier in the year he made sure that two days later they were all cut back. He bends over backwards to make things nice for his neighbours.

“We are hopeful that he will come over one day soon for a drink and to meet everybody. He always waves to us and offers to support charity events. He’s a great neighbour.”

Mr Hussain said: “John jumped to the back to push the boat away, it never touched the boathouse.

“I don’t want the yacht club to be tarnished. The guys there are great and we’ve had no issues.

“We are going to do whatever we can for them and George will be going to the club to see some very happy people.”