Look out for Fantastic Moss-ter Fox in florist's window 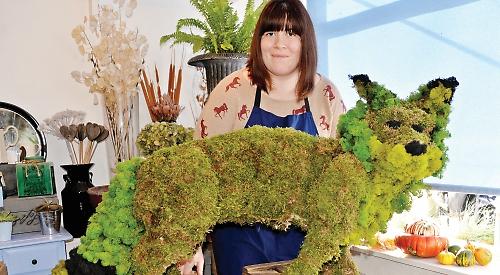 A SCULPTURE of a fox made from different coloured mosses has been catching the eye of Henley shoppers.

The 4ft model was created by florist April Deering, who works at Bluebells of Henley in Reading Road, and has taken pride of place in the window display for the past two weeks.

It is made from a “skeleton” of chicken wire with “fur” made from ordinary moss. The eyes, face and bushy tail were all created using different shades of reindeer moss, which has a fluffier consistency.

Mrs Deering, who won a silver medal in the young florist of the year category at the Chelsea Flower Show last year, put it together in two days.

Now anyone who makes a purchase in the shop will be invited to suggest a name for it and whoever puts forward the best idea by November 18 will receive a gift basket containing more than £100 worth of fresh flowers, bulbs, gourds, scented candles and miniature glass vases.

Mrs Deering said: “I’ve always had a fondness for foxes so when I had the opportunity to make something a bit different it was an obvious choice really.

“It was made for the window but we’re not sure where it will end up as we’ve had a lot of interest in it.

“Moss is a living thing so it should stay in good condition as long as it’s watered regularly. I made a rabbit from moss at Easter but I’ve never done anything quite this big before. It was a challenge but I really enjoyed testing my creativity.”

Molly Grimes, who runs the business with her daughter Amy Bryant, said: “People have been looking in as they walk past and children absolutely love it.

“We’ve already had a lot of suggestions for names, which is a good reward for the hard work that went into making it.”