Councillor dons Santa's red suit in the name of research 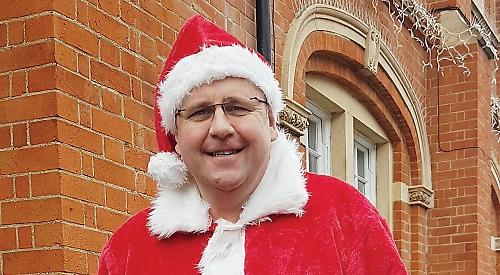 WILL HAMILTON has had to dress up as Father Christmas three times this month — all in the name of research.

The Henley town councillor was investigating how other towns organise their Santa fun runs.

It follows the decision by the town council to scrap Henley’s version this year due to cost and instead piggy-back at the weekly parkrun event.

Will, a Conservative, took part in the hastily-arranged replacement event in full costume and did the same for the fun runs in both Thame and Windsor.

As a result, he believes the Henley event could be resurrected next year with a new route through the town centre.

He says: “Once the Henley run was called off, I signed up for the Thame one and I have to say it was brilliant.

“There were 60 people running through the town — we need to get something like that over here.

“The Windsor one was even bigger with 250 runners and it stopped at 12 pubs along the way. It would be nice to run that in Henley the night before the main run, maybe in conjunction with Brakspear.

“The fun run is just a chance to have a bit of a laugh then meet people afterwards for coffee and a chat while raising money.

“It could start at the River & Rowing museum and finish at the town hall.

“You’d just need a decent website and a charity to benefit from it.

“It’s definitely worth thinking about and we’ll see what happens when the council gets a chance to discuss it in due course.”

The Henley fun run was founded in 2011 by then mayor Pam Phillips and was 2km, starting and finishing in Mill Meadows.

It typically attracted more than 150 runners, although only about 50 took place last year, and would raise up to £500 for charity.

This year’s 5km combined run took pace at 40 Acre Field but Will said he found the atmosphere among the runners too competitive for a fun run.

Furthermore, as it was free to enter, it raised only £23.20, which went towards the cost of organising it.