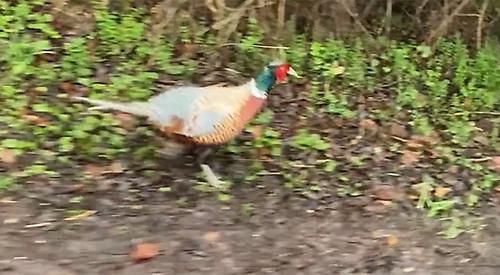 AN unusually aggressive pheasant has earned an affection nickname among residents of Checkendon.

Boris Pecker, as he has been christened, lurks in the bushes on the main road through the village and leaps out at passing cars.

He then runs alongside them at full speed while periodically veering into their path, presumably in an effort to “fight” them.

Amanda Stewart, from Woodcote, was recently ambushed by Boris so asked a passenger to film him.

The pheasant followed her car for several hundred metres and she had to brake several times to avoid squashing him when he vanished underneath it.

“He’s completely mad,” she says. “I know pheasants typically only jump up at the last minute but in all my years of hunting and shooting I’ve never seen that level of aggression. It’s very out of character.

“Boris has become very well-known around here, perhaps even notorious, and I hope no one ends his little life before its time.

“The funniest thing is that he only cleared off when I shouted at him ‘I’m filming you for the Henley Standard — is there anything you’d like to say?’”