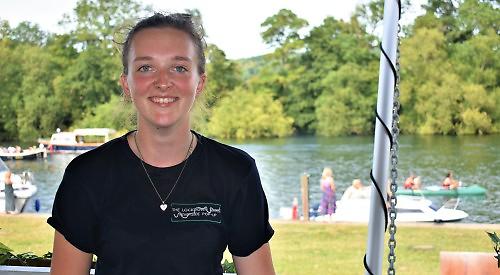 A STUDENT has taken a shine to a nest of birds that roosted at her father’s business for the second year in a row.

Minna Hughes started the Lockdown Lodge on the south bank of the Thames Path, near Hambleden Lock, last summer.

It is due to re-open today (Friday), when there is a soft launch, and will be open until August 15.

The pop-up café, bar and restaurant is made from four converted shipping containers, but much of the infrastructure is prepared off site and brought in using a loader crane.

Minna’s father, Chris, is the managing director of Event Kitchens in Binfield Heath and the containers are kept in his storage yard.

Last year, she discovered a pair of mating black and white wagtails in the eaves of one of the containers.

They had made a nest and three chicks hatched before the structure had to be transported to Hambleden.

The same couple were found underneath one of the lorries in the yard this year and Minna did not want the birds to be harmed. She made them their own mini Lockdown Lodge out of wood and included a bed of twigs and mealworms to encourage the wagtails to set up a new nest.

They have now made their home in the bird house and had four chicks last Wednesday.

Minna, 20, has also put a camera in the box so that she can keep an eye on the birds at all times.

She said: “Last year, we found the nest because we needed to repaint that part of the container and it was quite pressing. Although painting was something we didn’t need to do urgently, it was not the sort of thing we wanted to leave to the last minute and we wanted to be prepared.

“We had to look up what to do the first time. We didn’t find out too much, but we just decided it was best to leave them to it. We knew we had to protect the birds and the nest. Luckily, they fledged a week before we needed to move the equipment.

“We found them again this year and we needed the lorry, but we didn’t want to interrupt them. There is a bit that is protected that doesn’t having any moving parts.

“We could see that she was going in and out, so she was trying to make a nest and we had to encourage her to move somewhere else.”

Minna, who lives in Hambleden, is studying for a primary education degree at Oxford Brookes University. She put the website for the Lockdown Lodge together with help from her mother, Lisa, who used to work in marketing.

She is used to dealing with nesting birds as her family have kept chickens since she was little, but she found this to be much tougher.

She said: “That is much more controlled and trying to encourage a wild bird to nest somewhere else is very different. We have put the box next to the lorry, but out of the way so that they have a place to nest.

“Because we saw them last year, it feels quite heart-warming to see them growing. They have become a mini mascot for us.

“It has been really sweet, actually. They are quite friendly and we see them all the time when we walk by the lorry.

“Hopefully, they have got a place they can come back to all of the time, rather than finding other places in the yard.”

Minna came up with the idea for the Lockdown Lodge after her gap year travel plans were halted by the coronavirus pandemic.

She was volunteering in Botswana, but had to rush home to avoid being stranded abroad when the airports started to close.