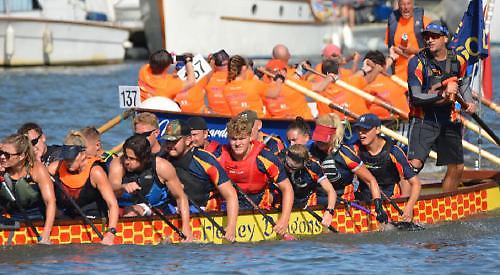 HENLEY Dragons put in a good performance at this year’s London river marathon, the Great River Race, which attracted entries from 314 boats from across the globe to compete over the 22.2 mile River Thames course from the Millwall Slipway to Ham Fields near Richmond.

The Henley Dragons was the last boat released onto the course and from the very beginning it was a battle for James Blake at the helm to keep his boat in clean water.

Blake read the river well as the boat sailed in on the tide, at times getting up to speeds of 16km an hour.

Henley Dragons weaved in and out of the other boats and different bridge arches along the course, narrowly missing a minor crash of old traditional rowing boats which had become entwined. Drummer Amelia Cooke kept the minds of the paddlers in check, keeping them focused and drove them on stroke by stroke.

Henley picked up the award for the third fastest boat on the day as they came home in 48th place, the first dragon boat across the line out of 10 competing. In doing so Henley Dragons finished in a time of two hours, 18 minutes and 37 seconds, beating the second placed dragon boat by nine minutes.

The previous week Henley Dragons competed at the new venue at Wath upon Dearne.

Up first, Henley faced Wraysbury and Three River Serpents in their first 200m heat. With Dan Wakelin at the helm, Henley got off to a quick start and won in a time of 51.72 seconds ahead of last year’s champions Wraysbury, to progress to the semi-final. Henley teamed up with St Neots to race in the ladies racing and finished in second place in a time of one minute 0.21 seconds behind winners Kingston.

The youth teams collaborated together in three teams — Storm, Lightning Dragons and Thunder Dragons — but didn’t make it into the final.

In the next round Henley triumphed in a time of 51.78 seconds ahead of Kingston in second and St Neots third. This result seeded Henley for the major final.

Henley shot out the blocks against Notts Anaconda and Seckow keeping up with the opposition, transitioning to a quick but powerful rate. However, Henley finished third in 50.93 seconds with Secklow winners in 48.81 and Notts Anaconda second in 50.45. In the afternoon, racing changed to the 400m course. Henley won their heat against Spirit of Yorkshire and St Neots to secure a place in the semi-final against Amathus and Powerhouse.

Henley got off to a good start but had to settle for second spot in a time of one minutes 42.98 seconds behind winner Amathus in one minute 42.78 second place. Henley were therefore placed into the minor final where they faced Notts Anaconda and 3 Rivers for fourth, fifth and sixth places.

Henley went out strong in the first two sections of the race, but Notts Anaconda pushed on through at the end to take the honours. Henley were runners up.

Tomorrow (Saturday) and Sunday will see Henley competing in their end of season national event in Nottingham.