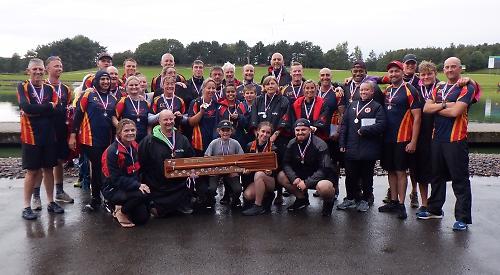 After finishing fifth in the national league, Henley Dragons rounded off their summer season by lifting the Cole Norton Award for the crew winning the most points over the two days’ racing.

Previously this award had been won by Amathus for the past 14 years.

The British Dragonboat Association (BDA) event involved five categories — ladies, open, mixed, seniors and juniors. Saturday saw 200m sprints with a 2km open at the end of the day while Sunday consisted of 500m sprints in which Henley entered a squad of 36 paddlers in the event.

In the sprint racing on day one Henley took on teams from across the country and finished first in the juniors, third in seniors, fourth in open, fifth in mixed and sixth in the ladies categories.

The teams’ results from the day were used to calculate the starting order for the open 2km race. Each team was released 10 seconds apart onto the three turn course.

Henley set off in eighth place in pursuit of Notts Anaconda, gaining with every stroke. Henley were soon on the heels of Notts and went ahead of them but Notts came alongside Raging Dragons, nipping inside them on the corner.

Henley followed suit, but despite Henley having priority around the corner, Raging Dragons didn’t give Henley room. James Blake, the Henley coach and helm, shouted their priority, and with that Henley turned quick, the tail of the Henley boat whipping down the left side of Raging Dragon’s paddlers, one by one.

With a few draw strokes, Henley were back in hot pursuit of Notts once again and gained on them inch by inch as they motored home. Wraysbury finished not long behind Henley very strongly. However, as this was a pursuit race, Henley finished in second place behind Wraysbury on finishing times.

The following day, with storms forecast, the BDA amended the race program to ensure an earlier finish.

The seniors set a high precedence finishing second in their race with long powerful strokes against Wraysbury.

The mixed crew were up next in the 500m race. The Henley crew settled into the boat, kept their focus and powered off the line. Whilst the start wasn’t slow, the other teams were quicker, but undeterred and still focussed, Henley paddled hard. With a strong race finish, Henley beat Secklow, Notts Anaconda and Wraysbury, losing by a dragon’s nose to Amathus to secure a place in the semi final. With the same race plan, Henley finished second to Amathus in the semi-final.

In the ladies racing there was little between the crews as Henley powered away and finished fourth.

The last set of races for the weekend was the open category for the 500m. Opponents Cambridge got off to a quick start, but Henley were soon pushing through the middle of the race, and then at the end the finish was powerful as Henley led the way to win the heat. Henley were then up against Notts Anaconda, Amathus, Wraysbury and Thames in the semi final where Henley thundered their way through to secure a place in the final having finished in second place.

Going into the grand final of the open 500m Henley beat Amathus to win the championship. Henley finished second in the race with Amathus in sixth place.

Speaking after the event, Henley Dragons chairman Chris Fowler, who has been a member of the club for 20 years, said: “This was a fantastic performance by all our paddlers and has established us as one of the top clubs in the country.

“I am so proud of the Henley paddlers, the organisation that goes into entering such an event and all the coaches at the club. There have only been seven clubs who have been awarded this title over its 22 year history, making Henley the eighth. It really is a huge achievement.”

Henley Dragons now look forward to hosting the Henley Winter Series which starts on October 20 from the Eyot Centre Henley.