Rafters set the pace as winter series gets under way 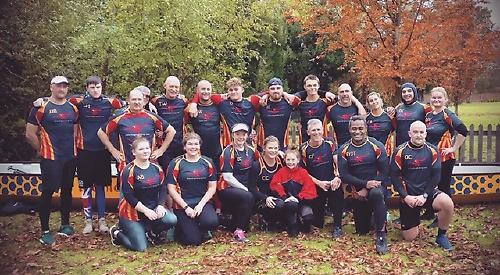 Crews from all over the country in eight dragon boats and two outrigger canoes gathered at the top island near Marsh Lock for the 10.30am start over the 7.5km course.

The crews, who started at 30 second intervals, went off downstream, under Henley bridge, turning around Temple Island, back under the bridge and up around the top island finishing at the Eyot Centre. Henley Dragons, who were crowned national champoins in Nottingham in September, were drawn to start off sixth behind Secklow 100 and ahead of Wraysbury and Rafters.

Henley started strongly, building up speed and settling into a strong pace. The Henley crew, equip with freshers to the winter series, battled downstream keeping ahead of Wraysbury and Rafters up to the Temple Island turn.

The Henley boat could see crews three a-breast as they careered towards the turn. Rafters passed Henley shortly before the end of the island with Wraysbury following in behind. Wraysbury had an advantage over Henley on the turn but Henley tucked in behind them in their slipstream as they all battled upstream.

Henley followed Wraysbury past Execalibre 10 man crew, Bristol, and also London Warriors and Pershore who were battling it out.

The Henley boat pushed on through to create clear water between themselves and the crews battling it out behind but could not keep pace with Wraysbury, as they pushed on in the pursuit of Rafters. Henley managed to finish in fourth place in a time of 34 minutes, 54 seconds. Rafters won the event in a time of 33 minutes, 14 seconds with Draysbury Dragons second in 33 minutes, 45 seconds and Secklow 100 third in 33 minutes, 49 seconds.