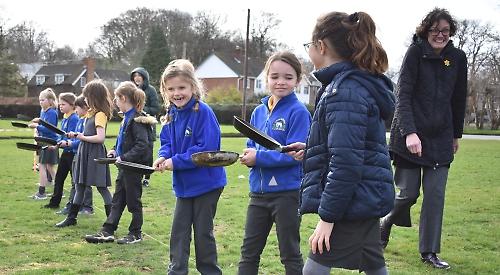 Dozens of youngsters took turns to run the length of the course on the village green, flipping their pancakes mid-way before dashing to the finish line.

There were races for all the year groups as well as for toddlers, mums, dads and grandparents and teachers.

The races were set off by Judy Fox, who organises the event with her friend Tilly Smith.

Many of the competitors dropped their pancakes while attempting a flip and the course was left strewn with bits of pancake by the end of the event.

Dozens of villagers crowded round to cheer on the runners and, when not racing, children cheered on and chanted the names of their fellow pupils.

The event was organised by Stoke Row Independent Chapel and school’s parents’ association whose members served pancakes to the runners after their races.

There was a small display on the green with facts about the tradition of eating pancakes on Shrove Tuesday. Rachel Doe, acting headteacher at the school, said: “It’s a long-standing event now and we all enjoy it. It’s a great chance for the community to come together and we have great support from the chapel and the parents’ association.

“We benefited from the sunny weather and the children absolutely loved it.”

Mrs Fox added: “This has been going for 30 years now. It’s a great community happening and the school is very supportive.

“We used to do it after school but found it was much better if the children came along. They’ve been involved for the last 10 years and now it’s a tradition.”