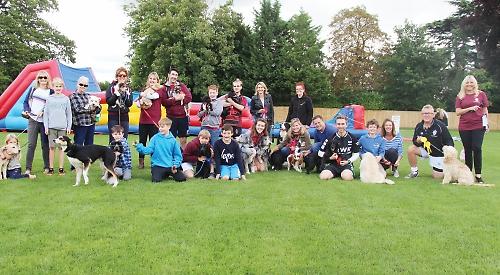 Dozens of parents, pupils, former pupils and staff attended and took part in activities including an 80ft inflatable assault course.

There was a cake sale and barbecue food and a bar throughout the day.

The dog show was compered by Dawn Greenaway, who chairs the college’s parents’ association, and attracted about 40 entries.

The waggiest tail award was won by three-year-old pug-cavalier cross Cilla, which is owned by Marcus Milburn, a member of staff.

The best trick was won by deputy head (academic) Gareth Hughes and his cocker spaniel Willow.

Odin, owned by Joe Perry, 14, was crowned the most handsome dog while Meg, owned by Monty and Bertie Wallace, aged 10 and 12, won the prettiest bitch.

Parent Karen Lowe won the prize for the dog that looks most like its owner after donning a black bobble hat with black and white clothes to match her Bernese dog Ella.

Helen Tuthill, founder of dog specialist company Holybrooks, judged the competition and awarded a £40 Tell Tails Photography gift voucher for the best in show, which was also won by Meg.

Ten teams took part in the touch rugby tournament, playing a total of 23 games which were refereed by players from Reading’s In2Touch club.

Johnny Reed and his team of 2016 leavers were crowned winners for the second year running.

Headmaster Gregg Davies said: “Despite the unpredictable weather, a great day was had by all.

“It was fantastic to see so many former pupils back to visit and I’m pleased to confirm that the staff members are now talking to each other again!”