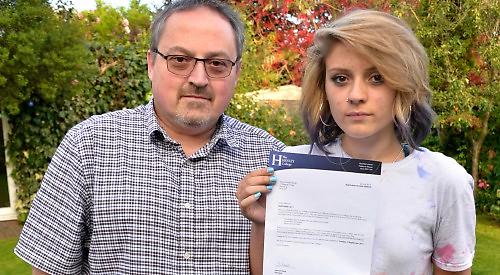 A STUDENT was told she could no longer study her chosen subjects on her first day at The Henley College.

Hannah Biddle, of Wilwyne Close in Caversham, phoned her parents Steve and Jacky in distress after suddenly being informed that she would have to change courses because of a timetable clash.

The 16-year-old, who sat her GCSEs at Highdown School and Sixth Form Centre in Emmer Green, applied to the college at the start of the year and received a conditional offer to study A-level music technology, media studies and film studies in April.

She got mostly Bs in her exams this summer, which included English literature, language, maths, geography and science. This was more than the required C grades so she was accepted.

But following an induction at her first tutorial on September 12, she was told her music technology and film studies classes overlapped so she could only pick one or the other. Staff suggested several alternatives including art or photography but these did not fit with her aspirations to work in music journalism.

Her parents collected her on the same day and took her to Highdown, which accepted her to study A-level English literature, media studies and sociology instead. They say she is happy there but should not have gone through such an ordeal in the first place.

They have complained and requested a refund of the £150 they paid for books, a month’s bus pass from Caversham to Henley and an additional voluntary contribution towards the college but are yet to receive a reply.

Hannah, who has two older brothers Tom, 25, and Chris, 24, says she knows other teenagers who have either returned to Highdown or persisted with subjects they didn’t choose after being told the same thing.

She had been happy at Highdown but wanted to go to Henley because several friends were going and it offered subjects she believed would help with her career.

Mr Biddle said: “She wasn’t as interested in the traditional academic subjects and The Henley College was very much ‘the’ place to go. It seemed to fit with her goals and we were all very impressed when we attended a series of open evenings.

“They explained what might be possible and what grades she would need and she was very pleased when she met those conditions. She couldn’t believe her luck and we were very happy for her.

“When she attended enrolment last month, they said she’d submitted all the necessary paperwork and everything was fine. She got a little tour of the Rotherfield campus, where she was meant to be studying, and it all looked great.

“The tutorial on her first morning went fine, but after lunch a note was left on her desk and her tutor said ‘oh yes, we need to talk about that — by the way, you can’t do your subjects’. Another woman came along and was pushing her to choose something else while Hannah was desperately trying not to cry so she could keep a cool head and think about what to do.

“In the end the woman said she could go home and think about it but she had to make her mind up by the next day, which is an appalling way to have handled it.

“It was very fortunate that my wife and I were both off work because we were out shopping when she phoned. She just wanted to come home and on the way back she thought about Highdown, which my wife and I hadn’t actually considered.

“She went in on her own and came out half an hour later with a big smile on her face. Her old teachers had given her a hug and arranged for her to study subjects which she now believes are more suited to journalism.

“I’ve written to the college several times but haven’t had a single word back. Her tutor was very understanding but I’m furious — not for myself or her mother but for Hannah, whose dreams weren’t considered at all. She was really excited about going to to college and thought it would be a bit of an adventure and a more adult experience.

“To have that sprung on her was quite a shock and the poor kid just didn’t know what to do. It was so insensitive considering she was on her own and in an unfamiliar environment for the first time.

“It’s lucky that Highdown took her back or she would have been stuck doing topics that weren’t relevant. We’re appalled at the lack of thinking on the college’s part. It’s not just the short-term inconvenience it would have caused but the overall impact on her future.

“When she posted about it on Facebook, several people replied within hours that the same had happened to them.”

Hannah said: “I was quite panicked as I’d spent the whole summer getting into the right mindset and ensuring I was fully prepared when I came to Henley.

“It was upsetting how casually they brought it up, as though they were playing it down and making out that it wasn’t a big deal. My subject choices will affect my future — where I go to university, what I study and ultimately my career.”

She added: “I didn’t feel I was being treated considerately. They definitely confirmed it all when I enrolled the month before, so I don’t see why it suddenly changed.”

A college spokesman said: “We do all we can to ensure as many subject combinations as possible but, as with any other college, we cannot be certain of final course numbers until this process is complete.

“We review the number of groups on offer in the light of actual enrolments. Occasionally this means that certain combinations of subjects are no longer possible and we have had two irresolvable timetable clashes this year across almost 1,900 student programmes.

“We are very sorry that Hannah has not been able to do the subjects that she wanted and, after discussion with her personal tutor, did not wish to pursue any alternatives. The voluntary contribution is always returned to students who withdraw and we wish Hannah all the best in her studies at Highdown.”