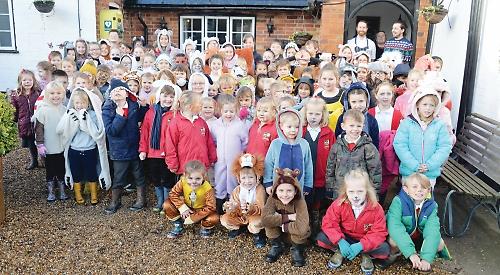 PUPILS at Peppard Primary School raised £1,000 for the animal charity Blue Cross with a sponsored walk.

More than 100 children from all the year groups took part in the
3.5-mile walk from the school in Church Lane to the Maltsters Arms in Rotherfield Greys and back via footpaths through Greys Green Golf Course.  They enjoyed hot chocolate at the pub. Many wore face paint and dressed in costumes such as tiger and shark onesies.

Headmaster Nick Steele said the school wanted to support Blue Cross after staff from the charity had attended an assembly where they taught the pupils how to interact with dogs safely. He said: “Some children know what to do with a dog. Others just think they are soft and cuddly, so the assembly was about not stroking the dog until you ask the owner and keeping your hands low.

“We thought, ‘what can we do to help them?’ and the school council decided a sponsored walk would be good. I was chuffed to bits and really proud of what the children achieved.

“Every child raised twice as much money as I thought they would so it was a real team effort.”

Blue Cross rehomes unwanted animals and provides veterinary services and education about how to behave around pet animals.