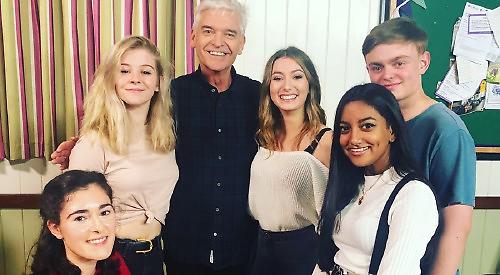 It was part of an episode of ITV’s How To Spend It Well At Christmas, which also featured nine members of the Henley Women’s Institute, as previously reported by the Henley Standard.

Students Natasha Robinson, Tyler Williams, Annabel Vary, Lucy Martinez and Maniska Bholah were offered the chance to participate in the filming process at Stoke Row village hall after they sent in videos of themselves in which they had to name their favourite Christmas food.

The groups were asked to rate Lidl’s 24-month matured pudding, alongside puddings from Iceland, Morrisons, Marks & Spencer and Fortnum & Mason and most agreed Lidl was the best.

Schofield cooked all five puddings in the microwave at the hall’s kitchen then brought them through to the main room where the testers sat at four tables.

Natasha, who is studying a performing arts level 3 extended diploma, said: “We had such a good laugh with the crew and other participants. As someone who is considering a career in acting, it was really interesting to see what goes on behind the ‘magic of TV’. I feel so lucky to have been given the opportunity to be a part of the show.”

Tyler Williams, who is doing a level 3 extended diploma in IT, said: “It was a unique experience and opened my eyes to the hard work that goes into filming a television show.”