Children’s history lesson with more than touch of reality 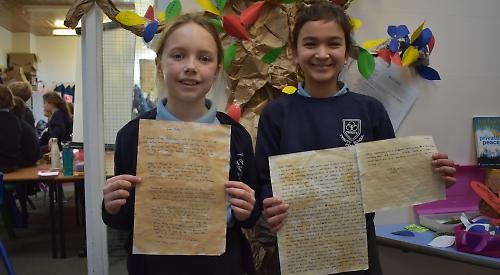 CHILDREN at a Henley school learned what life was like for soldiers in the First World War from an amateur historian.

Mike Willoughby, from Woodcote, visited Trinity primary and spoke to 90 children from years five and six.

He showed them pieces of equipment from a typical soldier’s inventory, including rations, a gas mask, helmets, gun and bayonet. In 2014 Mr Willoughby founded the Lest We Forget project with his wife Lesley to honour fallen servicemen and published a book on soldiers from the Henley area who died in the Great War.

He dedicated the book to his great uncle, Rifleman Arthur John (Jack) King, who was killed in action on July 8, 1916, aged 20.

“I found 120 men from Henley who died during the war who were not on any local memorials. I’m very proud to say they are now all on a memorial we have created at Townlands Memorial Hospital.”

The children had been studying the war for four weeks and Mr Willoughby’s visit was the finale. Some of the pupils had brought in letters written by relatives at the front. Teacher Sarah Williams said: “The children have written their own tea-stained letters and we did descriptive writing about the First World War. I really enjoyed reading them.

“We invited Mike to come in as he has always been very keen to share his artefacts and talk to the children. For them, it is as close as it gets to a first-hand account of what it was like during the war.”