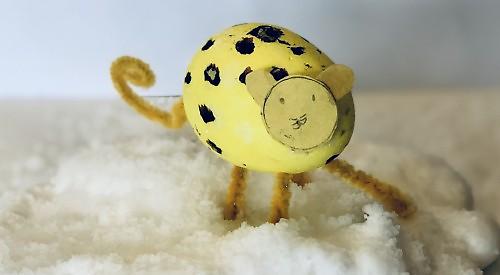 A GIRL was the overall winner of an Easter egg decorating competition after being inspired by her snow leopard onesie.

Rose Porter, five, wanted to display it on flour to represent snow but as it’s difficult to find in the shops at the moment, she used an alternative.

She was one of 35 entries to the annual competition open to children at Shiplake Primary School and the neighbouring nursery.

As the school is partially closed due to the coronavirus pandemic, entries had to be submitted by email or on its Facebook page. Judges selected the top four eggs and four highly commended designs.

Rose, who is in reception class, took about three hours decorating her egg, painting the shell yellow before adding black spots. She used yellow pipe cleaners for the legs and tail and drew a face on paper.

She lives in Memorial Avenue, Shiplake, with older sister Grace and parents Ellen Broughton and Jeremy Porter. Miss Broughton said: “Rose was completely shocked when we found out she had won. She was so excited and did a little jump around the room.

“She has a leopard onesie that is white and grey, so we started talking about them and she decided she wanted to do a snow leopard.”

The runner-up was Mabel Reed-Ryan, aged seven, who did a trio of pandas using a marker pen and felt to create the face, ears and arms. She rested the pandas in an egg carton and added twigs and leaves.

Mabel, who lives in Peppard and won the competition two years ago, said: “I got the idea because I saw white blossom and it made me think of pandas. They are my favourite animal and I would like to see one in real life. It probably took about an hour to make — the ears were tricky.”

Oscar Brind, aged six, who lives in Lower Shiplake, came third with a theme inspired by his love of racing cars. It is called “Grand Hatch” and it features two eggs, which were painted blue and red.

Oscar said: “I like cars because they are fast. I made the wheels using Play-Doh and white paper for the road. I was really happy with how it looked.”

His younger sister Arabella, who is in reception, also entered and she created two “ice creams”, using egg carton sections for the cones.

Rosie Fitt, aged four, who attends the village nursery, came fourth. Her design is called “Merm-Egg” and features a sleeping egg mermaid, with pink hair made of pipe cleaners and a blue tail.

The highly commended designs included “Cov-Egg-Advice” by Zac Fisher, 11, from Binfield Heath. He used a cardboard box to create a house, which was split into different rooms.

There are four eggs observing the social distancing rules and the inside of the lid has NHS advice, such as stay at home and wash your hands regularly.

Zac said: “I wanted to make it relevant to the current situation. I used a box to show the eggs in different rooms.”

Seven-year-old Athena Streather made “The Eggcellent Swing” because she has been spending a lot of time on the swing in her garden during the lockdown and there was also the “Det-Egg-Tives” by Rose-Anna Nicolson and “Candy Land” by Tilly Dunn.

The competition was judged by school governor Jane Chesters and nursery manager Holly Ackroyd. All eight of these children will receive a £5 voucher for Hobbycraft.

Mrs Chesters said: “This was during the first two weeks of home schooling when parents were still trying to get used to this set up. The snow leopard was a bright, sunny and slightly quirky idea. It really stood out.”