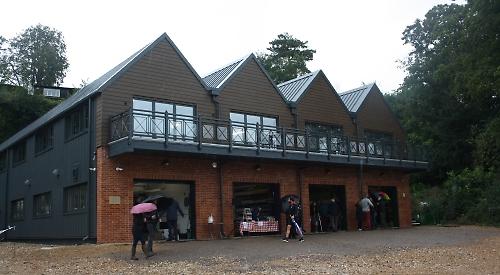 A NEW £2.2 million boathouse and multi-activity sports centre at Shiplake College has been officially opened.

The Davies Centre is a state-of-the-art facility on the Oxfordshire bank of the River Thames with a gym, archery and rifle range and a climbing wall as well as storage space.

It was completed in September last year and has been used by students since then but couldn’t be officially opened due to the coronavirus pandemic.

That changed on Saturday when former headmaster Gregg Davies, after whom the building is named, performed the opening ceremony at the independent school.

He was accompanied by his wife Alison and daughter Anna, a former pupil, and current head Tyrone Howe at the ceremony, which was attended by college coaches, governors, parents and students.

A tribute was also paid to Henry Trotter and David Lister, who were part of a composite crew that won the Visitors’ Challenge Cup in 1984 when they were pupils.

David Currie, the college’s director of rowing, congratulated the girls on their success and invited Mr Trotter to recall his race.

This was followed by a row-past in the rain featuring past and present rowers watched by spectators standing under umbrellas on the bank. There was also a boat naming ceremony before the ribbon cutting.

Mr Davies, who was headmaster from 2004 to 2019, said it was lovely to be welcomed back to the school.

He said: “Tyrone has welcomed me back and not all headteachers want their predecessors back, so it has been nice to return with my family. It’s not the Gregg Davies Centre, it’s the Davies Centre, so I’d like to think it’s about the support my wife and daughter have given me.”

Mr Davies, who is now education director for Bellevue Education, which runs 19 independent schools, praised the college’s success at Henley this year.

He recalled that at the first royal regatta after he joined the school, Shiplake were beaten on the first day and the following year didn’t even have a crew to enter.

“The year after that I was cycling next to them and I was so appalled I actually just kept cycling back to the school,” he said.

“So to go from there to 2021, when the girls have won at Henley, is just fabulous.

“I think this building is the icing on the cake and it will make a difference undoubtedly. It is opening up the sport for more people and, as nice and fantastic as this facility is, it’s all about the people.

“No one should think that this building enabled those girls to win. It might have made a two per cent difference, but everything else was mental attitude, their ability and the coaches.”

Mr Howe, who moved from Uppingham School in Rutland, said the ceremony felt like “another step back to normality” after the difficulties of the pandemic.

He said: “The building has been in operation for over a year but it’s another symbolic moment for the college, especially given the success at the regatta.

“This building is a chance to celebrate that. It’s not just about rowing, it’s a huge part of our character education, it’s the hub for our outdoor education and Duke of Edinburgh’s Award and the climbing wall is just brilliant.

“It sits with our core value of being inclusive. It’s a hub of excellence for rowing but it’s a lot more than that.”

Despite the rain, people were able to enjoy a barbecue in a marquee with drinks, snacks and cakes.

• Mr Davies was moved to tears when he found out the centre would be named after him in May 2019 during a ground-breaking ceremony to mark the college’s 60th birthday.