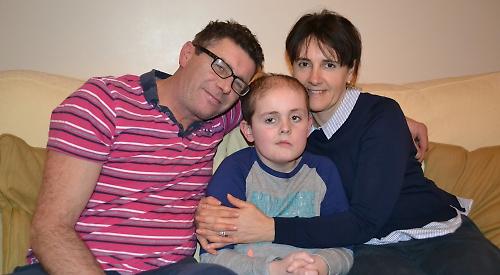 THE family of a boy who fought a brain tumour say they are delighted with his progress as he marks a year in remission.

Charlie Ilsley, nine, has almost doubled in weight in 12 months and his hair has started to grow back.

This is in stark contrast to when doctors removed the 4cm by 4cm growth and said that otherwise he would have had only weeks to live.

Charlie was in and out of hospital during 2015 and early 2016 and underwent four bouts of chemotherapy.

Now his parents, Toni and Mark, of Buckingham Drive, Emmer Green, have been told his latest scan was clear. Mrs Ilsley, 46, said: “I’m hopeful for the future, although I look more into the long-term effects. You just want your child to be normal. I was sitting on the sofa a little while ago and I could see Charlie out of the corner of my eye and he actually looked like normal Charlie, apart from the hair.”

Her son is looking forward to celebrating his 10th birthday next month by going go-karting with friends. Mrs Ilsley, a technician at the pharmacy at Tesco in Henley and the Day Lewis chemists in Sonning Common, said: “I said to Charlie the other night, ‘what do you want for your birthday?’ and he said ‘I just want to get through my scans’.

“He’s brilliant, he has been incredibly brave. He’s a strong little boy to go what he’s been through.

“I know it has affected him because he says things like ‘when am I going to be normal?’ and ‘I’m never going to get a girlfriend’.

“I think you just learn to live with it because life goes on. We have to try to make every day normal for Charlie. It’s really hard but you can’t live everyday as if the cancer’s back because there’s no point in living then.”

Mr Ilsley, 49, a builder, added: “He’s a very strong kid. He has been through more in his nine years than what we’ll ever go through.”

When Charlie finished his chemotherapy treatment in January last year he weighed just over four stone but he now weighs nearly seven-and-a-half.

Since then he has had scans every three months at the John Radcliffe Hospital in Oxford. Mrs Ilsley said: “We had a clear scan in March and took Charlie to Spain in May and from then on he was starting to improve, putting on weight and improving his balance.

“I don’t think he has ever grasped the seriousness of the situation. I think he’s too young, which is a good thing.

“You get this clear news and that’s all good for about four weeks and then you get an appointment for the next scan and it creeps through into your mind ‘what if it’s coming back?’ and you start looking for signs.

“I think in five years maybe I might be able to relax but now, not a chance. I feel like I’ve aged 10 years!”

The family had a scare following a scan in July when Mrs Ilsley received a call from Dr Kate Wheeler, a consultant paediatric oncologist at the hospital.

“I was at work at the time,” she recalled. “She said they had found something. The room just closed in on me. It was panic, sheer panic. She said the whole team had looked at it. They all came to the conclusion that they didn’t know what it was but they were not worried at that point and they suggested we wait three months and have another scan.

“She did say that if she was worried she would have Charlie back in that night.”

Her husband added: “I felt it was good news because they didn’t think it was a tumour of cancer. I always try to be positive.”

In October Charlie had another scan under general anaesthetic which showed that a light patch on his brain tissue had grown slightly.

Mrs Ilsley said: “It was about the size of a little fingernail and consultant paediatric neurosurgeon Jay Jayamohan said he could operate if he needed to but didn’t want to because it would be more damaging, especially if it was just scar tissue.

“Charlie always says to me ‘mum, what if it comes back?’ and my answer always is ‘it won’t’ because I try to shelter him.

“Because of this patch I said to him, ‘if it comes back Jay will operate’. I think he knew there was a chance he would be having more brain surgery because I didn’t want to hide it from him.”

In November, the family enjoyed a break in Florida organised by the Kids Cancer Charity as they awaited Charlie’s next scan in mid-January. The family received the results of that scan on Thursday last week.

Mrs Ilsley said: “I spoke to Kate and all she said was ‘it’s good news, it’s clear and everything’s fine’. I think I told her I loved her!

“It’s a weight lifted — you get up Friday morning and you have got nothing to worry about.”

Charlie has been back at the Hill Primary School in Caversham full-time since May.

He has 15 minutes of physiotherapy every morning and has hydrotherapy once a week at the Royal Berkshire Hospital in Reading as well as swimming lessons with his school at Queen Anne’s School in Caversham and a lesson once a week with a teacher at Highdown sport and leisure centre in Emmer Green.

He will have growth hormones to help his development later this year.

Charlie first showed signs of being ill in March 2015 when he started being sick in the mornings. After a CT scan, doctors discovered the tumour in the back of his brain.

He underwent a 10-hour operation in April that year in which Dr Jayamohan partially removed the tumour. Another tumour was found on his spine. Immediately after the operation Charlie spent three days in intensive care, where his brain activity was monitored, and then almost another three weeks before returning home.

He was back in the hospital a few days later, when his stem cells were harvested over several days in preparation for his chemotherapy treatment. He then underwent 31 sessions of radiotherapy to his head and spine at the Churchill Hospital in Oxford.

Mrs Ilsley has shared her experiences with other parents online.

She said: “You feel for all the other kids who haven’t had that clear scan.

“I think, like a lot of people say, that you suffer a little bit of post-traumatic stress disorder. You don’t want to let good news in.”

Mr Ilsley said: “I’m just so grateful for the people at the John Radcliffe Hospital and to Toni for doing what she’s done.”

l The Ilsleys have set up Charlie’s Fund to pay for revolutionary treatment in case the disease returns. They would want their son to have proton therapy treatment, so that he doesn’t have to have radiotherapy again. The treatment would cost between £150,000 and £200,000 but the couple say that if the money raised is not needed it will go to a children’s cancer charity or towards research. To donate, visit www.gofundme.com/p7ns5y74 4