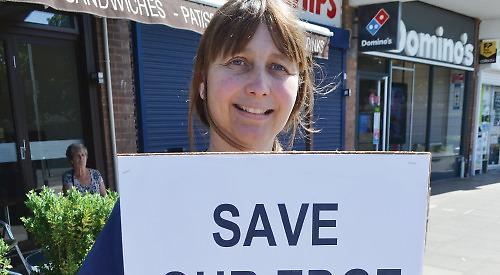 DOZENS of people took part in a third public protest against the potential closure of Chiltern Edge School in Sonning Common.

The demonstration took place at the shopping precinct in Emmer Green on Saturday and many of the demonstrators held up placards reading “Save Our Edge”.

A banner which had been signed by hundreds of children in support of the 507-pupil school was unfurled.

The secondary school in Reades Lane was placed in special measures in April following an Ofsted inspection in which it was rated “inadequate”.

Oxfordshire County Council, the education authority, is now consulting on possible closure while the regional schools commissioner is trying to find an academy sponsor for the school, backed by Henley MP John Howell and Reading East MP Rob Wilson.

More than 2,500 people have signed a petition opposing closure.

Campaigner Dave Robinson, from Caversham Park, said: “Following the excellent coverage in the Henley Standard, the momentum is really gathering.

“Both MPs have repeatedly said they are against the closure and we have had positive meetings with Oxfordshire County Council and Reading Borough Council.”

Mr Robinson, who retired from the school last year after 30 years as a history teacher, added: “We are optimistic that there is a future for Chiltern Edge.

“We are delighted that there is strong support from Sonning Common because the impact of closure would be disastrous.”

Jo Lawson, a former pupil who lives in Sonning Common and works at the village pre-school, said: “My son Jasper is in year 7 and my daughter Tilly is in year 11.

“I have a lot of passion for the school and it needs time, we can’t just get rid of it.

“It’s a strong part of the community and I don’t want my children to go anywhere else.

“My daughter has been very happy there and it’s more than just a school. It’s part of the village and means something to everyone. For that to go would be criminal.” Elspeth Denchfield, from Caversham, said her son Charlie was in year 8 and loved the school.

“He has achieved more academically, which has been a big boost for his self-confidence,” she said.

“The teachers are amazing. I think it would be utterly ridiculous if it closes.”

Julie Barnett, from Peppard Common, has a daughter, Isobel, in year 10 at Chiltern Edge, while her son Scott graduated last year.

She said: “My son got a good education there and did well. We are very lucky to have a local school and I don’t want it to close.”

She said: “We have faith in her and believe she can turn it around.” Mr Robinson added: “All the parents have been very impressed with the new headteacher who has a proven track record of turning schools around.

“She has got plans to balance the budget and she will be issuing an action plan.

“The campaign has always said that we believe, with strong leadership, Chiltern Edge has the capacity to improve.”

Last week, Miss Green said the support for the school was “overwhelmingly astonishing” and that parents should be optimistic.

The consultation on the future of the school will run until June 30 with the decision on July 18. To respond, visit www.oxfordshire.
gov.uk/chilternedge