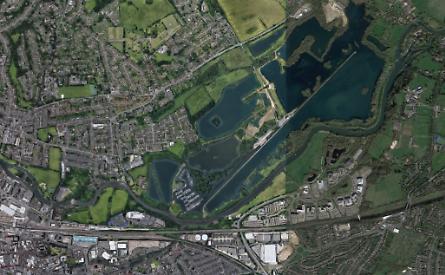 A STUDY into the case for a third bridge over the River Thames has been commissioned by two councils.

Wokingham and Reading borough councils have hired engineering consultants AECOM and Balfour Beatty to carry out the research.

The councils hope that a strong case for the £110 million bridge will attract funding, despite a lack of support from councils in Oxfordshire. A strategic outline business case costing £250,000 was produced on behalf of Wokingham council last year.

AECOM says it will look to develop the contribution of this scheme to “maintaining and enhancing the area’s position” and “providing confidence in the value for money of the scheme”.

The company says it will map out the approach for the business case with possible outcomes including less congestion on the roads, better reliability, faster delivery of new homes and an increase in land values.

The study could look at geometric constraints caused by the river and the Redgrave-Pinsent rowing lakes. It will examine viable structures for the crossing, including materials and finishes, with cost estimates.

The bridge would go over the lakes from the Thames Valley Business Park in east Reading to the Wyevale garden centre, near Playhatch in South Oxfordshire.

It is supported by the Berkshire councils the Thames Valley abd Berkshire local enterprise partnerships and Reading East MP Matt Rodda but Oxfordshire County Council and South Oxfordshire District Council are concerned about the effects on traffic.

County council officers are worried about the lack of research into the effects on land uses in the area, particularly the rowing lake.

They also want more flood risk assessments, more research into mitigation on the road network in Oxfordshire and possible behaviour change by drivers caused by a bridge.

Henley MP John Howell, who opposes the bridge plan, said the Berkshire councils were entitled to pay for the research but it did not obligate Oxfordshire parties to agree with them.

He said: “South Oxfordshire District Council is talking to Reading under the duty to co-operate but they do not have to agree with what they put forward.

“The argument still remains that the bridge is particularly useless unless there is somewhere for it to lead on to. The road network in South Oxfordshire is not adequate for that to happen.

“The investment required is enormous for this project and there is no indication that amount of investment is going to be provided.”

Parish councils in South Oxfordshire said last year’s study understated the problems the bridge would cause in their areas.

Representatives of villages to the north of the town say the B481 and other roads would be used as rat runs between the M4 and the M40 and no measures have been put forward to offset the resulting congestion.

The study suggested there was a strong business case for the bridge and it should be investigated further to avoid stunting the region’s economic growth.

It found the bridge would reduce pressure on some roads, including the A4130 and B478, but would see small increases in Sonning Common, Peppard Road in Emmer Green and Greys Road in Henley.

Councillor David Bartholomew, the county council’s cabinet member for finance, said he was concerned the new study would not be objective.

He said: “The Berkshire parties are continuing to push ahead without any enthusiasm or engagement by Oxfordshire. They are paying the consultants and they will be in control of it.”

Mr Rodda told the Commons last month that the lack of a third crossing was causing problems for commuters in South Oxfordshire traveling to Reading, Woodley and Maidenhead.

He said research showed the bridge would reduce pressures in many areas, including Henley and Reading town centres.

Councillor Tony Page, Reading council’s member for transport, strategic environment and planning, said funding for the bridge could come from his council introducing a workplace parking levy. The charge would be placed on employers with 10 or more parking spaces.

A spokesman for the borough council said: “We see the delivery of this bridge as key to alleviate traffic congestion across the whole area.”