Co-op food shop that’s good for you and planet 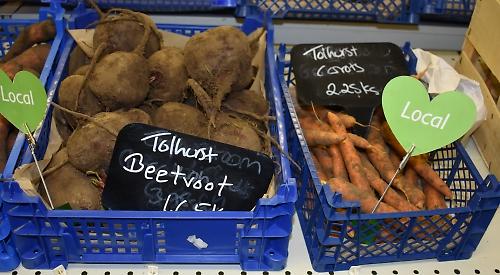 QUALITY, local food is the mantra of the True Food Community Co-op.

The shop, which began life as a club for people interested in organic, sustainable food 20 years ago, is now a successful business attracting customers to Emmer Green from miles around.

It sells local, ethical and wholesome food as well as toiletries and household goods and any profit is put back into the operation.

The co-op is owned and run by its members and the shop relies heavily on volunteers, many of whom first encountered it as customers.

“It’s not like supermarket shopping,” says Sue Malvern, from Caversham, who is a member of the committee.

“Our shopping experience is quite enjoyable because you can sit down and have a cup of tea and bring your kids who can play in the toy area rather than be in your shopping trolley.

“People here do make it a sort of destination. It’s completely relaxed and you are actually served by someone.”

The shop in Grove Road was first open in 2009 but the co-op’s members have been active since 1999.

It all began as the True Food Club, founded by locals wanting to source affordable organic food.

This followed the closure of wholefood stores in Reading during the period that the town centre was being redeveloped to create the Oracle shopping centre.

The club members decided to pool their resources and buy organic foods in bulk.

The venture grew and eventually began to operate as a mobile market at the Rising Sun Arts Centre and community venues such as church halls across Reading.

In 2004, True Food was formally registered as the not-for-profit True Food Community Co-operative.

It continued to run mobile markets across Reading until 2009 when it moved to Grove Road because the premises provided greater storage and warehouse space.

Between 2009 and 2013 True Food was awarded £100,000 from the Big Lottery Fund, which paid for the cost of refurbishing the shop, buying a van and rebranding as well as a survey of shoppers in the community. The money also enabled the co-operative to hire an additional member of staff.

However, in 2013 it became clear the store could not continue without grant funding or steps being taken to cut costs.

It then stopped running mobile markets and appointed a business manager to provide advice to secure the shop’s future.

Since then True Food has thrived and last year it had a turnover of about £500,000 and made a surplus of close to £5,000 which went back into the business.

Its mission is to enable people to change their shopping habits and buy food in an environmentally friendly and sustainable way.

The shop offers a range of goods — of which 95 per cent are organic — and wants to lead a movement towards greener shopping, not only to improve people’s health but also to protect the environment.

The store now has five permanent members of staff as well as more than 100 members from Caversham and Emmer Green who work shifts of at least one hour a month.

It also has the committee, which is elected at the annual meeting in April each year.

The shop is managed by Helga Bogisch-Francis, from Caversham.

She says: “We aim to offer the community affordable, organic food. Our fresh food all needs to be seasonal. Since we can buy the exact amount we want, there’s less waste so it’s more affordable because of that. We buy what we need.

“We do serve the vegan community but we are not a vegan shop.

“The meats come from small farms that are organically farming and butchering in sensitive ways. A lot of them do their own butchering and the animals have not had antibiotics — it’s just good food.

“We get environmentally sensitive, fair-traded and ethically produced products without harsh chemicals.”

Mrs Bogisch-Francis has been working at the shop for five-and-a-half years.

She says: “The work is hard and can be stressful at times but I absolutely love it.

“As a shop manager, the idea is that the members serve the customers and do all the work and I’m supposed to be managing them, as well as the shop, but it doesn’t always work out like that.”

Providing fresh produce is one of the main attractions for customers. Food is not wrapped where possible. It is sold in paper bags or sacks. However, this means a lot of the food has a limited shelf life.

Mrs Bogisch-Francis says: “We aim to have as little waste as possible. We recycle and we try to find charities that will take what is left over.

“We also try to put pressure on suppliers if they haven’t gone plastic free. We have conversations with them about when they’ll switch packaging.”

The bread and other food that is not used each day is redistributed via Olio, an app that alerts residents in the area to prevent food waste.

The produce is then given to those using the app for free at the end of the day.

The co-op also donates to the Reading food bank and there is a collection point in the store.

Eliminating people’s dependency on plastic is another ambition shared by its members.

The shop does this by providing paper bags and sacks for people to fill with cereals, grains, rice, potatoes and other items stored in containers.

It has a water station for people to refill bottles and an eco-friendly soap and detergent refill station where the products are selected because they do not contain harsh chemicals.

Mrs Malvern says: “We have definitely had more customers in the last 12 months and we think that’s to do with extending our refill stations as more people are looking for this locally.

“We were very early on that. It’s something that a lot of people really like about us. You can just fill a bag with whatever you want to buy — it’s very, very popular.

“We expanded it to floor cleaner, laundry liquid, shampoo and soaps so people can bring in their plastic containers instead of throwing them away and just refill them.”

The store buys goods from other co-operatives across the country including organic food provider Suma and Infinity Foods in Brighton.

However, local producers take priority and it buys vegetables from the Tolhurst Organic Partnership farm in Whitchurch and the Greenshoots nursery in Peppard.

In keeping with its green credentials, the shop receives a delivery from the Greenbroom farm shop at the Hardwick Estate in Crays Pond by electric and pedal bicycles.

The store has also tried to reduce its reliance on fossil fuels. It relies on refrigerators for its meat and dairy products and much of the electricity used to run these is generated by solar panels in the roof.

Now it is financially secure, the store is also aiming to compete with supermarkets.

Mrs Malvern says: “We are extremely competitive. We have a huge product range — about 15,000 products — so we are way up there with supermarkets and there’s a phenomenal amount of choice.

“Our organic eggs are cheaper than those in supermarkets and when compared with the organic range in the supermarkets, we come out very favourably.

“We are doing quite well and all the money is reinvested in the business.”

• The shop is open from 10am to 6pm daily except Tuesdays and Sundays.