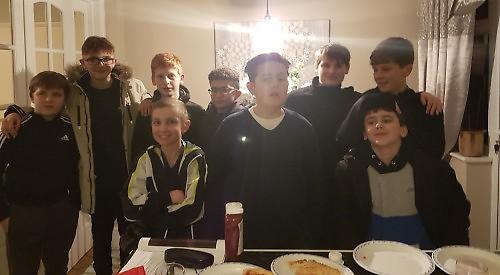 A BOY whose cancer is feared to have returned for a third time enjoyed an evening playing computer games with his friends in a custom-built bus.

Charlie Ilsley, 12, of Buckingham Drive, Emmer Green, was given the all-clear for the second time in August but his mother Toni was told last month that the cancer looks to have returned to his spine.

He and 10 friends spent two hours on the gaming bus, which was parked outside his home, after enjoying pizzas.

Mrs Ilsley said: “Charlie had the best night with his mates on the gaming bus. Ten of them came as a surprise… he had no clue the bus was outside.

“They arrived for 7pm, ate the pizza in the kitchen and then I told Charlie we were all going for a walk to burn the calories off. He wasn’t impressed until he saw the back of the bus.”

The bus, which is run by Game Heads, was arranged by Charlie’s older brother Ollie and his boss Alex Ashur, of HD Labels. Mrs Ilsley says her son cannot have any more chemotherapy as he had months of intense treatment in Turkey and his body couldn’t take any more.

They flew to Cologne last month where Charlie underwent a different kind of treatment in the hope of saving his life.

The dendritic immunotherapy should programme his body to fight cancer cells and Charlie will have three sessions. His mother says it is his last chance to beat the disease.

They returned home after Charlie’s first session where he was given a vaccine that is tailored to his body.

On Monday he had a lumbar puncture under a general anaesthetic to determine whether his spinal fluid contains cancer.

Charlie, a pupil at Highdown School in Emmer Green, will return to Cologne on January 7 for a second course.

The treatment costs £60,000 and the family managed to raise more than £40,000 in just days before flying to Germany. Charlie first showed signs of being ill in 2015. Doctors discovered a tumour about the size of a snooker ball in his brain and another on his spine.

He underwent a 10-hour operation and then had radiotherapy and chemotherapy before being given the all-clear in March 2016. Then in spring last year two tumours on his spine were discovered. His mother was so worried about losing Charlie that she took him to Turkey for CyberKnife radiotherapy treatment.

Charlie spent months going back and forth to the hospital in Ankara for the treatment. When that finished, he had immunotherapy treatment in Germany to help his body fight the threat of the disease returning.