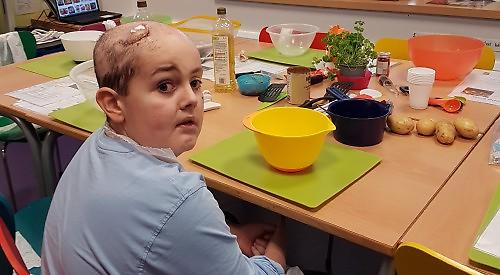 A BOY battling cancer for a third time has undergone more treatment in Germany.

Charlie Ilsley, 12, of Buckingham Drive, Emmer Green, was having his second round of dendritic immunotherapy treatment in Cologne this week. This should programme his body to identify and fight the cancer cells.

Last week, he underwent five days of chemotherapy treatment administered via an Ommaya reservoir placed under his scalp by doctors at the John Radcliffe Hospital in Oxford.

This means the drugs can be delivered directly to his spine after cancer cells have been detected in his spinal fluid. Charlie’s mother Toni, who flew to Germany with him, said the treatment was going well.

She said: “The chemo was okay. It was hard work going every day and then trying to rush home and go to work.

“Every day a different doctor administered it as they are all training to do it through the Ommaya.

“Charlie was fine though, very brave, and went to the hospital’s school and did a bit of cooking there and played the ukulele.”

Charlie has been fighting cancer since 2015 when he was diagnosed with a brain tumour and another on his spine. He underwent a 10-hour operation and had 31 sessions of radiotherapy followed by chemotherapy before being given the all-clear in March 2016.

Then in spring 2018 two tumours on his spine were discovered. He was taken to Turkey for CyberKnife radiotherapy treatment and was given the all-clear for a second time last August.

However, in November his mother and father Mark were told the cancer had returned.

They say the new procedure, which has been funded by the NHS, offers them hope without Charlie having to suffer the serious side effects he experiences when chemotherapy is administered normally.