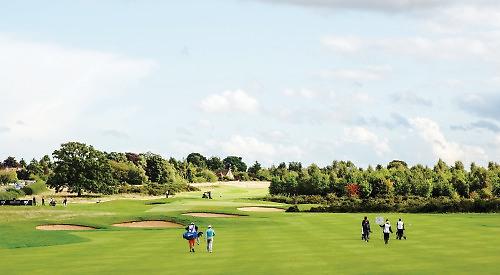 A PUBLIC exhibition about a golf club’s plans to relocate and sell its land for housing will be held next month.

Reading Golf Club is to leave its 96-acre course off Kidmore End Road in Emmer Green and merge with Caversham Heath Golf Club, which occupies land owned by the Mapledurham Estate.

The club says the move is due to falling membership and the threat of insolvency.

The sale will help finance a new academy course, practice facilities and clubhouse refurbishment at its new base, where it is scheduled to move to between October and March next year.

The club is working with Fairfax Acquisitions, of West Sussex. The company is yet to confirm the number of homes it expects to build on the land but Wates, the developer which the club worked with previously, planned up to 700.

The club has reached a deal with housebuilder Redrow to sell 28 acres of its land that is in Reading borough, subject to planning permission for development.

Just over nine acres of this has been earmarked for between 90 and 130 units in the borough council’s local plan.

The remaining 68 acres, which are in South Oxfordshire, were put forward as a “strategic housing site” in the district council’s local plan but not included in the final document.

Chairman Colin Reed outlines the club’s plans in a letter in this week’s Henley Standard.

He says remaining in Emmer Green would have meant the end of the club. He says: “With too few members and declining numbers, we were losing significant sums of money every week, every month, every year.

“Maintenance costs were spiralling, while the fact that the course is surrounded by houses on each side meant there was no opportunity to develop the sort of additional facilities needed to attract new members.

“Insolvency and club collapse was not something I, nor anyone in the golf club, wanted to see happen. Not just because of our personal interests in protecting the future of a club we love, but because of what that would mean for the neighbourhood.

“We’ve all read stories about golf clubs failing and their abandoned courses becoming havens for anti-social behaviour, criminality and even violence. That was not something we were willing to allow to happen and that meant we had to compromise.

“Compromise meant agreeing to working with Fairfax to give us a real chance to do the two things that matter the most to us: saving Reading Golf Club and making sure our land at Emmer Green provides an appropriate, sustainable and beneficial legacy and doesn’t instead become an abandoned, derelict and potentially dangerous or unsafe site at risk of arson.

“We are already starting to achieve those things. We are working closely with Fairfax to start the process of moving our club to Caversham Heath, while having conversations with people and groups across Reading about the future of our land.”

Mr Reed says the plans could bring a new healthcare facility to Emmer Green, address housing need and provide money for public transport, play space improvements and a new public park while ensuring there were opportunities for safer walking and cycling routes between Emmer Green and Caversham.

He adds: “I won’t pretend this isn’t a difficult compromise for everyone at Reading Golf Club, though.

“We’re not property developers and I would prefer to be teeing off than having discussions about planning permissions or local plan allocations.

“But doing nothing was not an option for our club. We were not prepared to abandon our members and everyone who lives in Emmer Green.”

A spokesman for the campaign group Keep Emmer Green said: “Rather than improve the financial position, the current members chose the option of moving to a loss-making club in Oxfordshire and selling off the land at Emmer Green for housing.

“Numerous alternative proposals were rejected, including the club’s own proposal. When in 2017 Reading Borough Council put out a call for land for its local plan the club put forward a small section of the course, including the clubhouse, for development.

“The sale of this land would have generated sufficient funds to secure the future of the club. The local plan option and alternative viable proposals were rejected in favour of a greater cash-generating development.”