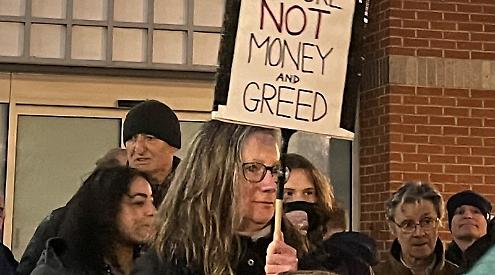 PLANS for 223 new homes at the former Reading Golf Club course in Emmer Green have been approved despite opposition from residents.

About 50 people demonstrated outside the Reading Borough Council offices in Bridge Street before the meeting of the planning committee on Wednesday night last week.

The protesters held banners with slogans such as “Keep the green, cut the greed”, “People and nature, not money and greed” and “Toxic air, don’t you care?”.

They chanted “Keep Emmer Green”, “we said no” and “RBC, stick to the plan”, referring to the fact that the development would be contrary to the council’s local plan.

After the protest, some left their banners at the entrance to the offices and went into the council chamber to hear the debate.

A previous application to redevelop part of the land off Kidmore End Road was rejected by the council in August due to the loss of green space and the additional congestion and air pollution that would be caused.

Fairfax, the developer, and the golf club responded by reducing the overall number of homes by 34 and including 67 affordable units as well as promising a new health centre, more green space, a cycle network and footpaths.

The committee was being recommended by council officers to approve the latest application, despite it prompting more than 4,000 objections, a record for a single application to the council.

She said: “This is just not okay and none of the changes in the application satisfy the concerns we had.

“You have an obligation to us and we are asking you to do the right thing and reject this application.”

Resident Jennifer Leach said the development would be “ecologically disruptive”.

“There’s a planet at stake here and this development doesn’t sit right with the context of the climate crisis,” she said. “If this proposal had the blessing of the community we would be having a very different conversation.

“We’ve got to turn the ship and the change has to start now and here — we need to start somewhere.”

She added that only a small proportion of the new houses would be suitable for young people.

Helen Lambert, of Caversham and District Residents’ Association, said the loss of open space was a key reason to refuse permission.

She also raised concerns about the new play park promised by the developer.

She said: “Would you let your children play there unsupervised? There’s still concern about the risk for trees, the green link and traffic on multiple junctions.”

Steve Harcourt, of Emmer Green Residents’ Association, said he was concerned not enough time was given to residents and councillors to properly understand the changes in the application and asked the committee to defer the decision to a later date.

Campaigners in the public gallery clapped as each of the objectors addressed the committee and some of them shouted that new houses should be built on brownfield sites rather than on a green space.

They also shouted “rubbish” and “no way” when the club’s general manager Gary Stangoe implied that the traffic would not increase as a result of the development as there were already about 300 cars parking at the course at peak times.

Richard Stainthorp, who supported the application, said the development would be an improvement for Emmer Green and would have public benefits.

He said: “It would provide much-needed affordable housing for families. This is land that the general public had no access to and the use of it was reserved for members.

“It will provide houses and futures for people to legally enjoy and benefit from.”

Jonathan Walton, agent for the developer, said: “This is a scheme delivering a considerable number of houses and it is what Emmer Green needs rather than what it wants.

“I recognise this is an emotional application for some but planning has to provide balance where needed.”

Councillor Clarence Mitchell, who represents Peppard ward on the council, said: “This is the wrong development in the wrong place at the wrong time.

“What’s the point of a local plan if it can be so easily ignored? What has really changed to make this application acceptable?

“More housing is needed in Reading but this plan only delivers a fraction of it. The long-term damage on the community is just not worth it.”

He said the development would mean the loss of more than 100 trees.

Cllr Mitchell said: “I was elected on a pledge to protect the green spaces and this plan is the definition of what I campaigned against and I can’t support it.”

Councillor Simon Robinson, who also represents Peppard ward, said: “This application is simply about greed. There’s no shortage of brownfield sites in Reading and they are more suitable for development.

“I’m truly shocked and appalled — we have our local plan, which should be our bible so why are we considering this application when it’s clearly in breach of it?

“It would cause irreparable damage to the environment and to the community. By accepting it, we are guilty of hypocrisy. It would be setting a dangerous precedent and we should not be bullied into it by developers.

“Listen to the residents who have spoken very clearly.”

Councillor Jane Stanford-Beale, who also represents Peppard ward, said she was concerned about the detrimental effect on traffic as well as the loss of trees and open space.

She said: “Our bridges on the Thames are at full capacity and we have declared a climate emergency but this application goes against it.”

Councillor Josh Williams said: “We need affordable housing in the borough but I think the loss of open space outweighs the benefits.” Councillor Paul Carnell said: “It’s an interesting proposal that would allow young families to put down roots in Reading but it’s such a huge diversion from the local plan and if we don’t abide by it does it have any purpose?”

But Councillor John Ennis said: “Thousands of people have opposed this but there would be lots of homes for young families — Caversham is a hugely desirable area and local people will be interested in these houses.”

Councillor Micky Leng said: “This application meets our affordable housing requirements — Emmer Green will still be green and a wonderful place to live.”

Councillor Tony Page said: “Affordable homes are unobtainable in the town centre or in other brownfield sites and I think there’s nothing less biodiverse than a manicured golf course.”

Councillor Karen Rowland said: “The opportunity for real affordable housing is an incredible thing that we can’t overlook.”

Councillor Jo Lovelock, who chairs the committee, said: “This has been a very difficult application for us and I understand where the residents are coming from.

“I think this is a considerable improvement and we have a lot of gains that will help mitigate the effects but I understand why people are going to be upset about this.”

The committee agreed to approve the application with nine votes in favour, three against and one abstention. As the decision was made, several campaigners shouted “shame on you”.

A spokesman for the developer said: “We are very pleased with the planning committee’s decision.

“This is the culmination of extensive work to bring to this area an attractive, welcoming and thoughtfully designed new residential community.

“It will provide a wide range of benefits for Reading, including houses and much-needed affordable homes for families.”

The council’s decision could still be overturned by Michael Gove, Secretary of State for Levelling Up, Housing and Communities, following a request by Cllr Mitchell to “call in” the application.