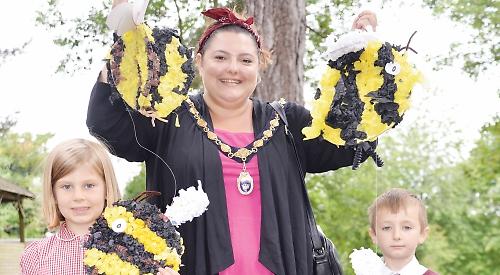 CHILDREN from primary schools across Henley are helping get the town ready for judging for this year’s Thames and Chilterns in Bloom competition.

These have been displayed at the Regal Picturehouse, in Boroma Way, where Henley Mayor Kellie Hinton will open a two-hour judging tour of the town on Thursday.

Bees are Henley in Bloom’s theme for this year and they are running a number of projects to promote bee conservation.

Councillor Hinton, chairwoman of the bloom group, will give the tour with the town council’s parks manager Gareth Bartle.

She said: “They don’t just look good visually and provide a visual impact but there is also an educational aspect. While making the bees the children have been able to learn more about animals. As well as the bees looking nice it demonstrates aspects which I think Henley in Bloom is all about. It helps cover areas like wildlife and pollution that are really important.”

The tour for judges Julie Graham, from Bray, and Peter Goff, from Milton Keynes, begins at the cinema, where Cllr Hinton will give a presentation on the group’s work.

Last year the town was judged by Peter Thompson, from Peppard, and Norman Parker, from Stony Stratford. Usually one judge comes back to see year-on-year progress.

Cllr Hinton said the situation was frustrating. She said: “I believe in having some consistency with judging and someone returning from the year before.

“This year we have not got that. Naturally we are trying to show progress we have made. For example the green wall at Mill Meadows looks a whole lot better then last year. It’s a trial and error project and it’s easier to get that across to the judges if they had seen it before.”

There will also be a short boat trip along the River Thames.

The judges will be shown the hundreds of hanging were bought by businesses and residents as part of the Henley Standard’s Buy a Basket campaign.

These contain pollen rich plants to help bees and other insects as part of this year’s Henley in Bloom theme.

To finish the tour the town council will set up a table in the courtyard at Millennium Court, off Market Place, for lunch. This will be provided by the Station House pub, also in Market Place.

Cllr Hinton appealed to residents to clear the streets of litter and make sure their gardens were looking their best.

She said: “Obviously we are trying to deal with rubbish in the town and we want people to take pride in the town.

“Some shopkeepers already sweep outside the front of their premises but everyone could do it. It only takes a few minutes to make sure there is no litter.

“If everyone took a little bit more care that would be wonderful. We should be doing it all year round and not just for judging.”

Henley in Bloom has won five consecutive gold awards, the top classification, in the regional competition.

Last year the town lost its title as the best in the region to Amersham, which represented the area in Britain in Bloom. Henley had won the category in 2014 and 2015.