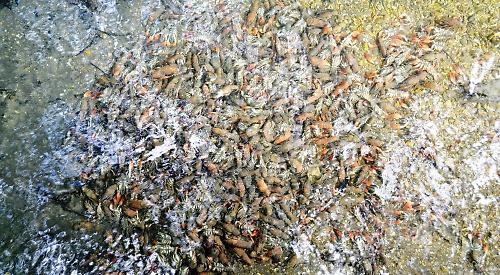 HUNDREDS of crayfish have been found dead in the River Thames near Henley.

A large pile of the creatures were spotted last Friday in an inlet at Aston, where a stream on land owned by the Culden Faw estate flows into the river.

Dozens more were loosely scattered nearby at the riverside launch site, which is at the end of the lane beside the Flower Pot pub.

The three-inch crustaceans are of the red signal variety, an invasive American species introduced to Britain during the Sixties in a bid to eliminate fatal mould outbreaks among native white-clawed crayfish.

However, they are capable of carrying and spreading the same disease without being infected themselves and also threaten a number of fish species by eating their eggs.

Alex Dick, manager of the Culden Faw estate, said several of his neighbours had reported it to the Environment Agency in case a pollutant had been leaked into the water. He added that a bloom of algae could have have suffocated or poisoned the creatures.

Mr Dick said: “We have no real knowledge of what could have caused it. I must admit I didn’t even know we had crayfish in our stream but I walked the whole length of it and didn’t find any, dead or alive.

“It’s very strange how they’re all in that one spot. I was concerned that something might have been released into the water on our land but everything was fine when I checked, so it’s a bit of a mystery.”

An Environment Agency spokeswoman has confirmed it is investigating but it appears unlikely that the incident was caused by disease or pollution, in which instance no further action will be taken.

Dozens of dead fish were found in the Thames at Henley, off Marlow Road, in 2013. This was traced to a leak at the nearby Thames Water sewage processing plant and in February the firm was fined a record £20 million for the breach and others in the Thames valley.

There is no suggestion of any link with last week’s incident.