Swan population on the up with more cygnets on river 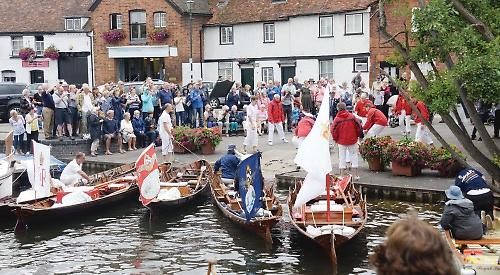 THE Henley area’s swan population continues to increase after years of decline, say the men tasked with the official count.

A total of 18 birds were found between Hambleden Lock and Mill Meadows in Henley during this year’s swan-upping ceremony, which takes place along an 80-mile stretch of the River Thames over five days every July.

Counters found a breeding pair and two separate adults with 15 cygnets between them, which is two more than the number of swans identified last year and a significant improvement on the seven found in 2013 and 2014. The figure had been steadily decreasing since 2009 but began to turn around last year.

The tradition dates back to the 12th century, when the Crown claimed ownership of mute swans.

Representatives of the Crown and the Vintners’ and Dyers’ Livery Companies travel down the Thames in traditional rowing skiffs in search of the birds.

When they find a family they shout “All up!” and take them aboard their boats before mooring, then weighing and measuring the creatures on land and checking them for injuries.

The youngsters are either tagged in one of the livery companies’ colours or left unmarked, meaning they belong to the Queen. A ring is attached to each to show they have been counted.

This year’s swan-upping began at Sunbury on Monday and finishes at Abingdon Bridge today (Friday) and on Wednesday the Henley Standard joined the uppers on their journey from Hambleden to Henley.

Dozens of people gathered at Hambleden Lock to see the boats arrive. They were meant to arrive at midday but delayed by almost an hour because of the large numbers of swans found further downstream.

The crews wore their traditional outfits, which are coloured red, blue and white for the Crown, Dyers’ and Vintners’ companies respectively.

The six skiffs were towed at times by accompanying motorboats and followed by groups of pleasure cruisers on board the Waterman, Hibernia and the New Orleans, all owned by Hobbs of Henley.

Onlookers gathered on the deck to watch the ceremony with binoculars or take photographs.

The first family of swans, a single adult with six cygnets, were found immediately upstream from the lock. With the owner’s permission, the uppers moored at the rear garden of a riverside property and carried out the necessary checks.

The next group, another adult with five cygnets, was found near the grounds of Greenlands off Marlow Road, where the group stopped to formally count them.

Finally, a breeding pair with three cygnets were found at the slipway at the foot of New Street in Henley.

A large crowd gathered to watch the uppers in action then followed them along Thames Side to the River and Rowing Museum, where they stopped for lunch before getting back on the water. By that point they had found 86 swans, whereas they only found 72 across all five days of last year’s swan-upping.

David Barber, the Queen’s swan marker, who lives in Henley, stopped for photographs and chatted with the public about his work. He said: “It’s been a very positive result this year and a vast improvement on the previous figure. There’s always natural variation between years but we’ve been working hard on educating people.

“There’s still the issue of natural predators like mink and birds of prey, which often snatch cygnets, but we’ve done a lot of work with fishing clubs to reduce discarded tackle, for example. However, the downside is that dog attacks are still taking place including one in Henley earlier in the year, which is pretty grim.”

He added: “We continue to urge owners to keep their pets under control.” In May, a newly-hatched cygnet was killed in a suspected dog attack at a nest near Remenham, off the Thames Path. It was one of a brood of five, another of which died when an egg was snatched by an unknown predator. The Swan Support rescue centre at Datchet taped off the nest to protect the family and urged dog owners to take greater care when walking thir pets.