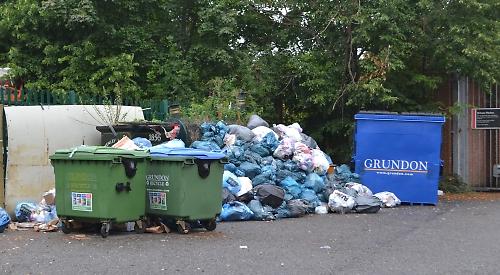 TRADE waste cleared from Henley town centre has been dumped in a huge pile at a council depot.

Bags of rubbish from shops and businesses have continued to pile up at the town council site off Reading Road, near the Tesco supermarket and a gym.

It has led to a row between rival councillors after claims by the ruling Henley Residents’ Group that a problem with collections had been resolved.

This meant the rubbish was left in the streets all night, sparking concerns about the effect on the town’s night-time economy, particularly during Henley Royal Regatta and the Henley Festival.

Last month the council employed another contractor, GT Can Do, of Henley, to clear the rubbish on a temporary basis while it negotiated a new arrangement with Grundon. However, the opposition Conservative councillors have said the problem has simply been moved after scores of bags were found piled up at the depot on Tuesday last week.

The discovery was made by Rachael Dobson, who lives off Reading Road, and runs fitness classes at No Limits Gym nearby.

Miss Dobson said: “Since last Tuesday the pile has probably quadrupled in size. One of my clients commented on the smell.

“It will soon get hotter and then we will be really aware of it, not to mention that there could be rats underneath. There is food packaging in the bags. It’s a real health hazard.”

Conservative councillor Sam Evans blamed HRG for the problem at a council meeting on Tuesday.

She said: “All credit for taking it off the streets but it has been dumped somewhere where visitors won’t go but will be noticed by residents.

“If it’s worth doing it is worth doing properly, don’t go and dump it in another part of town to make everyone look good.”

Cllr Evans said she had smelled the “indescribable stench” while attending exercise classes at the gym.

“You could even smell it inside the gym,” she said. “We have what could be an infested area next to the major supermarket, which I do not think is a good idea.

“The rubbish has been taken from one place and dumped somewhere else. I’m sorry, but it does not seem like a solution.”

Fellow Tory Councillor Will Hamilton said he had been contacted by gym users about the build-up of rubbish.

Councillor Stefan Gawrysiak (HRG), who led cross-party task force to tackle the issue, said the rubbish pile would be taken away.

“I have contacted Grundon’s depot manager to get the bags cleared,” he said.

“The task force got together to try to solve this problem for Henley. The solution was a good one. We got the bags away at the depot for what should have been a short time. The system worked for three or four weeks.

“I think we have come up with something that works for the town.”

From August 7 Grundon, which is based in Ewelme, will provide an extra vehicle collection every afternoon to clear trade waste from the town centre. This will be taken to the depot then loaded into containers before being collected for recycling and reprocessing.

Councillor Ian Reissmann (HRG) said: “This council responded by putting in place a temporary solution and we now have a permanent solution.”

Mayor Kellie Hinton (HRG) said: “While some councillors have been working in the cross-party group to find solutions, others have been finding small bags of rubbish and taking photographs to share on social media. It is bringing the council into disrepute.”

Grundon is one of several companies supplying commercial waste services to Henley’s shops, restaurants, cafés and other businesses.

The company will also collect on Friday evenings and Saturday mornings.

The council are looking to find another contractor to carry out collections on Saturday and Sunday evenings.