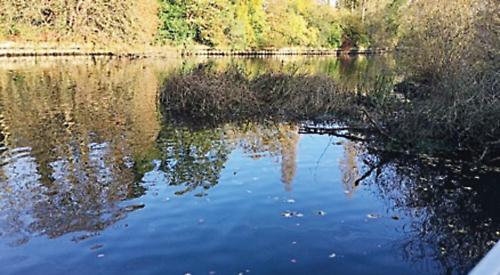 MORE must be done to prevent a highly invasive and fast-growing weed from smothering the River Thames, says an ecologist.

The Environment Agency has started clearing floating pennywort from the river at Sonning after concerns were raised by Alastair Driver, who lives in the village and used to be the agency’s conservation manager.

He said the clearance teams were only removing large clumps of the plant and leaving smaller patches.

Professor Driver, who oversaw the eradication of the plant at Reading a decade ago, said the agency should sweep the main watercourse more often and more thoroughly.

It should also tackle a second infestation at Hennerton backwater, which flows off the Thames near Wargrave, which it has promised to do.

Floating pennywort, which comes from the Americas, can grow up to 20cm in a day and forms a thick layer that kills flora and fauna by depriving them of oxygen. These “carpets” are too heavy to remove by hand so must be pulled out using mobile cranes then incinerated to ensure they do not reproduce. Every fragment must be destroyed to prevent an infestation from recurring.

Prof Driver said: “The Environment Agency has thanked me for drawing the matter to its attention and I have no doubt that it appreciates the seriousness of the situation.

“However, it is not investing enough resources into the situation. I can cycle or walk along the towpath at Sonning for days on end without seeing any action when really this should be prioritised as highly as a major pollution incident.

“They need to tackle this robustly over the autumn while the weather is dry. Once the winter rains arrive, the flows will speed up and the plant will spread more rapidly so they’re wasting an opportunity. They’ve acknowledged that they’re leaving smaller clumps behind and say they will come back for them but that’s not the right approach given how quickly it can grow.

“They should also address the problem at Hennerton because it has spread there from the river and is now well-established. It’s going to be much harder to address if they don’t act decisively now.”

However, Tom Berman, of Henley Road, Wargrave, asked Prime Minister Theresa May, who lives in Sonning, to take up the issue.

The agency’s area director Julia Simpson agreed to taken action “on this occasion” but still didn’t accept it was the agency’s problem.

Mr Berman said: “It’s progress but I’m not confident they will come and am trying to get them to commit to a date.

“It clearly isn’t landowners’ responsibility and I’d like them to retract that claim. The pennywort has invaded from the main channel and the roots are not on the banks or the land beneath the water’s surface. They’ve known about this for years and their lack of action has allowed it to spread. It has taken up well over half the width of the backwater and it’s becoming increasingly difficult to pilot a powered boat through.

“Its growth will slow down with the first frost of winter but it grows incredibly quickly and it will spread pretty rapidly next spring.”

It was accidentally introduced in the early Nineties by people discarding garden plants and it is a criminal offence to grow it in the wild. It is thought to have spread to the Thames from a lake at the Green Park science estate in south Reading in about 2008.

The Environment Agency says it will sweep repeatedly to ensure every fragment is removed and reassess the situation in the spring, spraying herbicide if necessary.