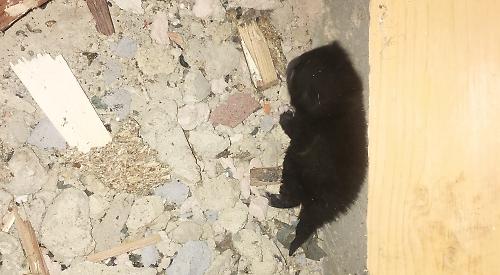 BUILDERS find all sorts of things on site, particularly when they are preparing a derelict building for demolition.

But George Harman and his team from Bellwood Homes, based in Princes Risborough, found more than they bargained for at the former Nikhon Thai restaurant on the A4074 in Cane End.

They rescued three kittens hidden under floorboards after hearing their tiny cries while carrying out checks on the site, which will make way for six homes.

They managed to locate the first kitten through a hole in the floorboards. But then they heard more noises, so began removing floorboards and 30 minutes later discovered another kitten 10 metres away.

Mr Harman, a project manager, said the hardest part of the rescue was rescuing the third kitten.

He said: “We had heard more cries in the room but then there was silence. When it started crying again we managed to trace the noise to a bay window. We removed more and more flooring but we still couldn’t see a kitten anywhere. We could still hear the cries and then we realised they were coming from inside the wall.

“We started to remove each block by hand, gently tapping the blocks with a hammer trying to loosen them without causing any disruption or discomfort to the kitten. We removed 10 concrete blocks in total to find that a third kitten had somehow got into the cavity of the building.”

The rescue took the builders about three hours before all the kittens were safely removed.

Mr Harman added: “The kittens looked to be in a pretty poorly state with gunk around their eyes. They were covered in cobwebs, dirt and dust and were so small you could feel every bone in their body. I can only imagine that they were starving hungry.”

Mr Harman was unable to find the mother of the three kittens so he took them to the Blue Cross rehoming centre in Lewknor.

As the kittens were only weeks old they initially required around-the-clock care.  Staff at the centre fed them every four hours and helped them go to the toilet, something usually done by the kittens’ mother.

The trio had been named Bill, Elle and Beatrix but Bill was renamed Billie after vets confirmed the gender. They have all at least doubled in size since the charity started looking after them.

Laura Smart, an animal welfare assistant for the charity, fostered the kittens at her home. Other members of staff also helped out, looking after them by taking them home each evening.

She said: “When they first came in to us they needed feeding every four hours. One of the kittens, Elle, had a really bad eye which was glued shut and ulcerated.

“After lots of tender loving care they are all getting stronger by the day. Elle is very affectionate and cuddy and loves lying and falling asleep on her back. Billie is very confident and loves exploring.

“She walks around my house like she owns it, while Beatrix is really cute — she manages to fall asleep in my hand.” The kittens have already all got separate homes to go to when they are ready. It should take about three weeks, when they will be vaccinated and then go their separate ways.

Clare Cruttenden, rehoming manager for the charity, said: “We don’t know how old they are so we are having to guess. They were all the size of a hand when we got them. When they are not being fed at that age then they are not growing like they should be.”

The charity has seen a huge increase in stray cats and kittens being brought into their rehoming centres during the summer months as it is breeding season.

It is now reminding owners to neuter and microchip their cats and to keep their address and contact details up to date.

Eighty per cent of cats brought to the charity for rehoming in 2017 were suspected strays but were more likely from loving homes. Without a microchip they could not be reunited with their owner.