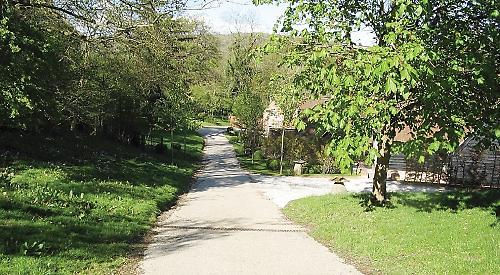 A BILLIONAIRE’S plans to fence off a public footpath near his home have been criticised by campaigners and two councils.

The 1.8m-high fence would run along the bridleway, which is part of a longer countryside walk, but would cut into part of the it, reducing its width to single file in places.

The route would also be diverted around the electric gates either side of the farm.

There are currently signs in place which request that walkers, cyclists and horse riders use a “preferred” route north of the site rather than walking past the farm.

The plans have been criticised by the Open Spaces Society, Buckinghamshire Ramblers, Buckingham-
shire County Council and Ibstone Parish Council, which say the fencing would spoil people’s enjoyment of the bridleway and give the impression that it is on private land.

Kate Ashbrook, general secretary of the Henley-based Open Spaces Society, said: “Twigside is in a lovely, quiet valley in the heart of the Chilterns Area of Outstanding Natural Beauty.

“Deer fencing would be an eyesore and particular for users of the bridleway, which is an attractive, open route with a wide path on a direct line.

“The fencing would result in the path being narrowed in two places, causing a pinch point for walkers, riders and cyclists. This would adversely affect their enjoyment and ease of use.”

Miss Ashbrook said permission for the route to be moved would require a formal diversion order, which the society would object to.

She said: “We believe the fence would also obstruct a footpath which runs to the north of the bridleway.

“With electronically-controlled gates, these works would make the whole area appear private, threatening and urban.

“Already the owner has erected discouraging notices about CCTV; the fencing would make this situation worse.”

Kieran Foster, national off-road advisor for Cycling UK, said the plans would narrow the bridleway, making it less attractive and harder to use.

Adding to the number of gates would inconvenience people using the path and could lead to conflict.

Mr Foster said: “Users would now have to stop and use gates twice in the space of a short distance.

“This would be a significant inconvenience for both horse and cycle users and might also negatively affect access for disabled users.

“The excessive use of gates is a particular bugbear for cyclists. The difficulty and disadvantage of opening gates, along with their restricted width and latches, is widely complained about by many of our members.”

Ibstone Parish Council said: “It is clear that the proposed erection of deer fencing and two sets of gates would significantly diminish the ease and enjoyment of use of the existing bridleway.

“The parish council therefore objects to the proposals but would not object if the bridleway were to be diverted to the current ‘preferred route’.”

Jonathan Clark, strategic access officer for Buckinghamshire County Council, recommended that the application is refused due to the loss of a public amenity.

He said: “Walkers, cyclists and horse riders, travelling in pairs, would be forced to align in single file twice within a short distance, which is inconvenient.

“It would add to the impression the area is private, discouraging public use and further encouraging use of the alternative route already deemed inconvenient.”

Mr Clark added that he didn’t believe the fencing would be effective at keeping deer out of the site as the gaps would be too wide.

In a previous planning application, representatives of Mr Getty said that walkers using the bridleway often stopped to take pictures of his property, including the gym.

They said the public could see into a living room and even watch a large wall-mounted television.

The application will be decided by Wycombe District Council.