Chalk mine labyrinth was once a hive of industry 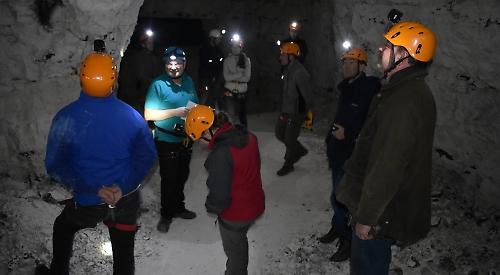 IT has a history dating back almost 400 years, but many people still do not know about the chalk mining heritage of Emmer Green which sits just 20m under their feet.

Now a generation of scouts are getting the opportunity to learn about it first hand as they are taken on tours of the historic mine under their headquarters in Jefferson Close.

The mine was once a hive of industry in the area and employed hundreds of locals who were charged with excavating minerals and crafting bricks to build homes.

It also played a vital role during the Second World War but lay mostly forgotten after it closed more than half a century ago.

However it has been revived by the 89th Reading Scouts, who are now taking select groups down the 20m shaft to explore the labyrinth of tunnels, ensuring the mine remains an important part of the community more than two centuries on from its heyday.

Scout leader Robin Kent said: “The first written record of brickmaking and a brick kiln being here was in 1655. The oldest house is 1490 so they were probably making bricks here before it was written down.

“You had the perfect combination of clay on top and chalk, which was mixed with the clay to make bricks and stop it shrinking when in the kiln. With the copse next door you also had a lot of wood to fire the kilns.

“It was at its peak in the late 1800s when 12,000 bricks were made a day. There was a lot of building in the local area but it also went out quite a way, including Nuneham Courtenay.

“They almost certainly started taking chalk from the surface and formed shafts as they got deeper and deeper. It took nine men to make 1,000 bricks per day and they were making 12,000 so that’s more than 100.

“Plus there were miners getting the chalk out and other things so there were probably a couple of hundred people here. It was quite a hive of industry. The material was used for a lot of other stuff.

“There’s a lot of flint as well as chalk which was used as a building material but also for roads and paths. They also used chalk ground up as a soil improver.

“The decline of the brickworks was around the turn of the century and coincided with the first bridge across the Thames. They now had to compete with the big commercial brickworks in the centre of Reading. It carried on being used for a while but not at the same sort of volume up until the Second World War.”

It was during the conflict that the mine found an alternative purpose — as a safe base for the county archives. But there was also a more serious use should the Nazis make headway into Britain.

Mr Kent said: “All the records were moved down here for storage and the more valuable stuff from Reading Museum. There are a couple of huts built into the mine and it took us a long time to work out what they were there for.

“The nickname was Churchill’s Commandos but the official name was the auxilliary units. They were put together for the threat of invasion. They built a whole line of bases from Bristol to Norwich with eight people in each and if there was an invasion they would go underground.

“They were armed and had explosives and their job was to blow bridges and other guerilla tactics. If there was an invasion their life expectancy was four weeks.”

Fortunately the unit was never called into action and the mine remained intact following the end of the war in 1945. However, changes in industry meant it was slowly phased out of use.

Mr Kent said: “It seems to have closed as a brickworks in the Fifties. By then they had the big industrial factories turning them out. It was just shut and left.”

Many of the nearby areas are named after the mine or brickmaking industry.

Mr Kent said: “The road that runs along here is called Kiln Road and the field opposite is Clayfield Copse. There’s one theory on the internet that the area itself, having caves and digging stuff out going back thousands of years, is called Caversham meaning ‘Caver’s Home’.”

The mine passes under the nearby Kiln Road and varies in depth from around 25m to about 10m at its highest point. While it is perfectly safe for the surrounding houses now, that was not always the case.

Mr Kent said: “The high point is a mud collapse of surface soil which is the original entrance and they had to put a shaft in. There are stories that one house years ago lost a lean-to into a hole but that’s not documented.

“One that is documented is that Caversham village used to have a village hall and one night they had a dance. When they came back the next day the hall had fallen into the ground!”

The site was bought by the scouts in the late Fifties and was used by the group in the Seventies and Eighties before the trips underground were stopped over health and safety concerns.

A second shaft in the garden of one of the nearby houses behind was also closed and the mine remained out of use for more than 20 years before the troop looked into reopening it.

A new entrance shaft was created and the leaders were taught how to safely take groups in and out. They now regularly take groups down to explore the mine, including geologists and geo-engineers.

Mr Kent said: “Five years ago, when we were redeveloping this place and looking to provide on-site facilities, we decided to have a look at it and what it would take to reopen it as a scout resource.

“It’s also used as a training mine by the fire brigade and also the Gloucester Cave Rescue Group, who we worked with to get it open, and others.”

The rescue group also designed the new entrance after an old one was closed off. It uses a pulley system to lower individuals down and also has an 80-rung ladder.

Mr Kent says there are lots of interesting features of the mine which he explains to the groups he takes down. The walls are daubed with graffiti from those who used it or visited, including the wartime Mayor of Reading, William McIlroy.

Tools, bottles and even scallop shells, which would have been filled with moss and animal fat and used as makeshift candles, have been found down there, as well as newspaper clippings from the time.

The mine is also home to five species of bat, a fossil can be found embedded in one of the walls, while it was scouted as a location for a Robin Hood movie last year.

Mr Kent said: “We explain the geology of it and how 60 million years ago it would have been a sea. There are some good geological features down there as well, including a fault which would have been an earthquake. Then there’s the history of it, including the producing of chalk for brickworks and the Second World War use.

“For a long time we thought that there were three mines in the area. We knew there was ours and one in the garden of an old people’s home nearby. Then we found out that ours is actually two connected.

“This time of year we are going down every couple of weeks and we take other scout groups down as well, not just ours. There is the interest of actually getting in there initially.

“We used to climb down the ladder and then back out again but when Gloucester were here they said it would be more fun to lower them in through the shaft.

“It’s interesting for other groups like geology groups as it’s good for them to go under and see the formations that haven’t been disturbed. We always get a good reaction.”