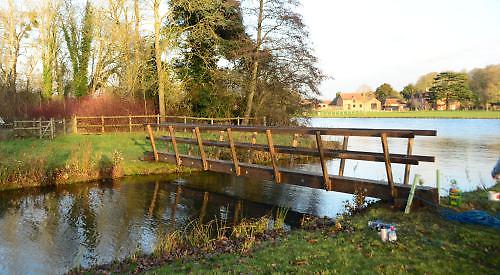 A DATE for a new fully accessible bridge to be installed on a public footpath near Henley has not yet been confirmed.

The Fawley Court Estate has said it will co-operate with Buckinghamshire County Council’s plan to fit a wider structure across its land on the western bank of the River Thames.

The estate fitted a like-for-like wooden bridge in December, 15 months after the original one collapsed, even though the council is responsible for the structure.

The council said materials for a wider bridge were sourced last spring but were stored at a workshop while it waited to obtain permission to access the site.

Other bridges on this route are not fully accessible but the council is aiming to replace old bridges which are “beyond economical repair”.

A council spokesman said: “When the landowner requested us to provide a like-for-like bridge instead, we shared revised plans with the landowner and had to source new materials which were delivered to the workshop.

“The date for installing a replacement accessible bridge has not yet been set or discussed with the landowner.

“Rights of way structures are normally replaced when they are beyond economical repair.

“The county council’s 2020-2030 rights of way improvement plan makes it clear that when replacing old bridges, widths on footpath bridges will be increased to 1.2m to improve access and ramps installed to replace steps.

“Along this Thames-side footpath, from its entry point on the A4155 Marlow Road to the boundary with Oxfordshire, the county council has in the past 18 months replaced one 3m vehicle access bridge and repaired a footbridge with replacement materials.”

The estate surprised the council by fitting the like-for-like bridge, meaning the route was re-opened, but said it would be willing to remove the bridge when needed.

The absence of the footpath led to a protest in November when campaigners from local walking groups vented their frustration at having to use Marlow Road, which they said was dangerous and unsuitable due to a lack of pavements.