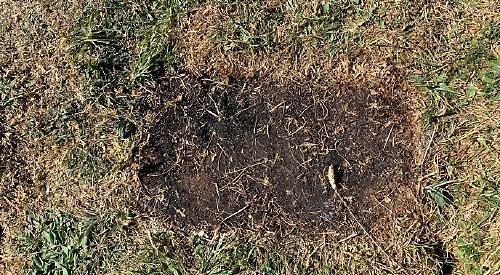 A LARGE number of the Berkshire, Buckinghamshire and Oxfordshire Wildlife Trust’s nature reserves have been damaged due to antisocial behaviour.

There have been widespread cases of littering at our reserves across the three counties as the warm weather coincided with an easing of coronavirus restrictions.

At the Warburg reserve, near Henley, there has been picnicking, football on the chalk grassland and barbecues, while at the Hartslock reserve, near Goring, the orchids have been trampled on.

Elsewhere, barbecues have caused fires at the Wildmoor Heath, Greenham Common, Snelsmore Country Park and Wokefield Common reserves in Berkshire, where there has also been an increase in dogs scaring sheep.

Fly-tipping has been reported at a number of reserves, including Bowdown Woods and Shepperlands Farm and Moor Copse.

At Hosehill Lake, boating and swimming has disturbed nesting birds including terns, lapwing and oyster catchers.

People fishing in front of a specially created sand martin wall are thought to have caused a failure of nests there this year.

Dogs have been out of control chasing wildfowl and their young at Sydlings Copse and a grazing pony was found with a long dog lead wrapped around its neck and leg.

Fences and buildings have also been damaged.

At Wildmoor, people have cut fencing to reach restricted and protected areas of the reserve and at Moor Copse wildflowers and nesting areas for skylarks have been damaged.

People have broken into an old building at Greenham, causing substantial damage to its structure and roof.

Fences have been cut at Oakley Hill reserve to reach the Chinnor cement works lake to swim. The fence prevents livestock from escaping and they now cannot graze this area of the reserve.

Car travel to sites has also increased at many reserves, which are often in remote locations with very limited parking.

There has been a big increase in people driving to the site as well as litter, dog mess and fires at Cholsey Marsh in Oxfordshire.

Cars have been dumped on verges and in front of gates, meaning emergency services vehicles would struggle to reach people if needed and social distancing has been ignored.

At Weston Turville reservoir in Buckinghamshire we have seen unprecedented numbers of people using the site for recreational purposes with lots of disturbance being caused to breeding birds such as water rail, great crested grebe and reed warbler by people swimming, carrying out unauthorised boating on the lake and due to groups of people partying, drinking and having fires on the fishing platforms that extend out into the reservoir.

The site has also seen an increase in other inappropriate behaviour, with people walking with dogs off leads and cycling along the narrow permissive paths.

There has also been a huge amount of litter left on site which has been blowing into the open water and inaccessible areas of the reedbeds where it will pose a serious risk to many species of animal that make their home at the site.

Mark Vallance, senior land manager for Buckinghamshire, says: “I have just come back from our Calvert Jubilee nature reserve and was shocked by what I saw.

“A large section of the lakeside bank has been dug out to create a flat platform. I can only presume this is for sunbathing and for a group to sit and drink on while others were swimming and boating on the lake.

“There was loads of litter everywhere and there were paths pushing down to the lake edge through sections of reedbed where I could still hear singing reed warbler.”

Christopher Williams, land management and people engagement director for BBOWT, says: “I’ve been shocked, saddened and angered by the frankly disgraceful behaviour and actions by some people which we have witnessed at our nature reserves in the last few weeks.

“These special places have been lovingly cared for by volunteers and staff for decades and it is very upsetting to see the impact of the actions of a few thoughtless individuals.

“I’ve worked in the sector for nearly 30 years and I’ve never seen anything like this. We have seen a dramatic increase in vandalism, fly- tipping, litter, fires, out-of-control dogs worrying our livestock and people feeding and abusing our grazing ponies.

“People have been disturbing important nesting sites by playing, swimming and kayaking in lakes and ponds set aside for wildlife.

“People have been having picnics, playing football, flying kites and drones, camping and having barbeues at these sites, which are meant to be where wildlife can thrive.

“None of these activities is permitted at our sites and they are doing untold damage to the prospects of rare and precious wildlife.

“Our land management teams are already struggling to cope with the impact of the coronavirus outbreak and this is causing additional and unnecessary stress to those dedicated staff and volunteers who care for these places.”

BBOWT is asking anyone who witnesses any anti-social and criminal activity at any of our nature reserves, to call Thames Valley Police on 101. Details of how to report these incidents is explained on our website, www.bbowt.org.uk

We also ask people to spread the word that this is not acceptable through their own social media outlets. If the matter is serious, please contact BBOWT.

In summary, five reserves in Buckinghamshire, eight in Oxfordshire and 12 in Berkshire have been affected, making a total of 25 out of the 73 reserves across the three counties.

(with thanks to John Bentley)