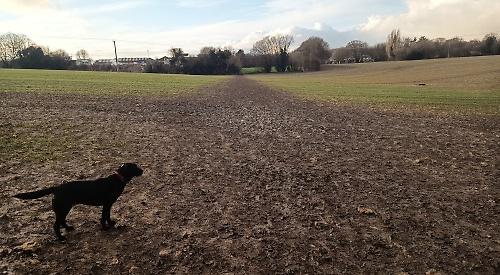 LEADING conservation organisations in the Chilterns have come together with farmers and landowners in urging people to stick to footpaths and keep their dogs under control when walking in the countryside.

The latest lockdown has coincided with a period of particularly high rainfall, making paths extremely wet and muddy.

This, combined with far greater numbers of people using their local paths, is damaging paths and crops.

Paths have widened to several metres across with people trying to social distance or seeking drier ground. Some people have abandoned the waymarked paths altogether and followed field edges instead to avoid the worst of the mud. This is damaging field margin habitats, which are important for wildlife.

The Chilterns countryside is providing much-needed solace and pleasure for people at a very difficult time.

However, it is also a farmed landscape with many paths crossing farmers’ fields. The message from farmers is clear: please keep to the paths.

Chilterns farmers care for the land which produces our food and many have played a vital role during the lockdowns supplying their local communities with fresh local produce. The land they manage has always been popular with walkers but, like many farmers, they have experienced a big surge in numbers and issues not seen on that scale before.

Dr Elaine King, chief executive of the Chilterns Conservation Board, says: “It’s great that more people are getting out and enjoying the nature and the beauty of the Chilterns during lockdown and we want that to continue.

However, the Chilterns are also a place where people live and work, including the farmers that produce our food.

“We are working with a wide range of farmers, landowners and conservation partners to raise public awareness of this special landscape and ensure that everyone can enjoy the Chilterns safely.”

The Countryside Code sets out some simple guidance to ensure that people can enjoy their visit to the countryside while being safe and respectful of others. Visit https://bit.ly/2YfK3dE