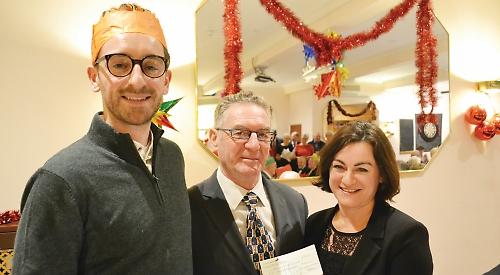 Ian Ford-Batey, master of the Temple Island Lodge, which meets in Henley, presented a cheque at its annual ladies’ night Christmas party to Lisa Grant, the YMCA’s general manager.

The YMCA, which is trying to raise more than £500,000 to buy the lease on its complex in Lawson Road, was the chosen charity of last year’s lodge master Shahid Butt.

Mr Ford-Batey also presented a cheque for £500 to Zoe Lane, a fund-raiser for brain injury charity Headway Thames Valley, which is based in Henley and will be the lodge’s chosen charity for this year.

Jamie Higgins, who was also present, told the masons how the charity helped him after he suffered a brain injury in an assault in 2012.

He said: “I spent several weeks in hospital with a brain haemorrhage. Once discharged, I didn’t have much idea what had happened to me or much support. My wife ended up losing her job looking after me. For the next year I didn’t do too well until I came across Headway.”

Mr Higgins was told he wouldn’t walk again but said he was now making good progress thanks to the charity.

The party also included a performance by the Henley Carol Singers while a raffle with prizes including wine, chocolate and a lodge tie raised £375. The lodge is looking for new members. Anyone interested in joining should call Richard Wyndham-Smith on (01491) 614823 or 07768 324331 or send him an email at wyndhamsmith@aol.com