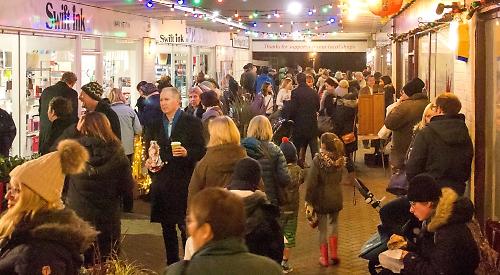 HUNDREDS of people flocked to the centre of Goring for its annual Christmas shopping evening.

Businesses in and around High Street stayed open until 8pm and offered customers entertainment and treats while stalls in The Arcade sold festive goods.

Children could pet animals at the veterinary centre and talk to the vets about their work while a crew from the fire station demonstrated their engine at the car park in front of The Arcade.

The Inspiration gift shop sold hot waffles and organised a treasure hunt in which children had to find four fluorescent “glow sticks.”

The Chocolate Café had a merry-go-round in its car park while upstairs was Father Christmas’s grotto, which about 120 children visited.

Nigel Levy, of Goring Village Butchers, was selling hot pork rolls while the Marvellous Hair salon and the Swiftclik print shop were giving away wine and prosecco.

There were performances by the Goring Primary School choir (above) and jazz violinist Andy Taylor, a regular performer at the Goring Unplugged concerts.

Vivienne Lee, who owns the café and was organising the event for the first time, said: “It was fabulous. Lots of people came and had a great time. I’m delighted with how it went and looking forward to doing it again next year.”